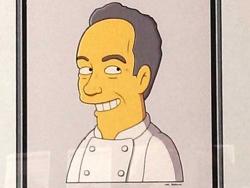 I never ate at elBulli; I’d hazard a guess you never did either. The clientele seemed to be almost exclusively food writers for glossy consumer magazines and the trade press. And yet you almost certainly have eaten something inspired by a dish or technique that originated at elBulli. Like Vivien Westwood dresses, few people actually wear them but they do wear the clothes that derive from them.

elBulli wasn’t always a gourmet Mecca (by the way if you want to have real food cred you should know it’s pronounced El Buwee). Back in the 1960s it was just a bar serving drinks for patrons of the local golf course and run by a German, but a German with characteristically, a master plan.

He wanted a great restaurant and he hired good people and in 1984 Ferran AdriÃƒÂ , until then just one of the staff, was promoted to joint chef and the elBulli story began proper. It was a story that would lead to domination of the World’s 50 Best Restaurant Awards.

AdriÃƒÂ  would perhaps be still winning except he chose to close, perhaps recognising that everyone gets knocked off their perch eventually and it’s always best to jump. Nowadays the cooking of Scandinavia tends to dominate those awards, with the focus not so much on the laboratory as what chef can find in a skip or under a stone. Fashion in food is fickle and journalists need new things to be the first to discover and champion.

But with this major London exhibition, AdriÃƒÂ  has his place in history assured. His maxim of creativity, not copying, can be seen in its gestation and finally its triumph as you wander through the rooms, with food becoming a concept and experience.

The way elBulli is talked about can all be a bit pretentious but anyone who has sat through AdriÃƒÂ ‘s conversation, he always says far too much and in far too long bursts for the translator to ever keep up, knows that he has more of a sense of humour than the curators of this show are prepared to admit, although they do include Matt Groening’s, the creator of The Simpsons, portrait of AdriÃƒÂ  which raises a much needed laugh.

The artefacts from elBulli are in glass cases, as if they were flint headed arrows from the Bronze Age. Kitchen tools like Pacojet are exhibited, but as you can buy such things in the shops, their value comes from where they have been. And did those hands in ancient times walk these machines?

You can see elBulli’s collection of plasticine’food’, used to design the presentation and to be referred to for consistency. The strange and wonderful serving plates which, placed under glass and without food, begin to have the rather macabre look of instruments from a Victorian hospital.

It’s a well curated, imaginatively laid out exhibition with excellent use of audio visual. The sombre lighting and the glass cases however can make you forget that this is actually about food, something which should be joyous and flooded with light and laughter.

This can be remedied by going afterwards to the terrace where you can drink the beer of one of the sponsors, Estrella, who have teamed up with Ferran and brother Albert to have their recipes on the side of 4 packs of bottles of Estrella Damm.

It seems an extraordinary tie up, one that if done by Gordon Ramsay would earn him hisses and boos from the food community, but in this case they seem to be politely averting their gaze. AdriÃƒÂ  still has a lot of clout and is rumoured to have a new restaurant in the pipeline and no one wants to be on the black list for that.

elBulli: Ferran AdriÃƒÂ  and The Art of Food runs at Somerset House until 29 September 2013