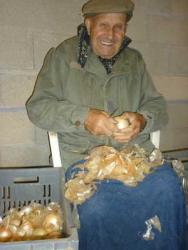 Gunshots ring through the cool mountain air. The villagers are shooting wild boar, known as sanglier, found in the foothills of the Cévennes in the Gard region of France. Bruno is standing on terraces on the edge of the 100-strong village where he and his great, great great-grandmother grew up and his parents, who keep goats, still live. ‘We mostly live off the land, eating wild pigs, deer and goats, foraged mushrooms and sweet chestnuts – and of course sweet onions,’ he tells me.

The local onion, l’oignon doux de Cévennes, is prized for its tender texture, honeyed taste and fine, pearly white, almost iridescent papery skin. They are sold all over France, as well as in Belgium and Luxembourg, with producers currently trying to break into the UK market. The sweet onion boasts an AOC (Appellation d’origine contrôlée), the French regional food certification, along with Nîmes olive oil (the Gard is the second highest olive producing region in France), Perrier and pélardon – a soft ripened goat’s cheese with a distinct aromatic flavour thanks to the goats’ diet of grasses, chestnuts and heather.

Small producers have been eking out a living on steep dry stone terraces known as faïsses since the 1830s. The landscape of this isolated and impoverished area has changed little since Robert Louis Stevenson travelled through here and wrote his account, Travels with a Donkey in the Cévennes in 1879. But here, as in communities all over France, communities are seeing an influx in younger generations returning to their family homes and working the land. 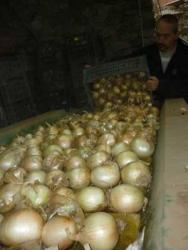 Bruno runs the local sweet onion cooperative made up of around 100 onion producers, 95% of which are family run operations. The work is hard and labour intensive, the plants are thirsty and the terraces steep. During harvest time in August teams of students are drafted in to help with the heavy work, but machinery used and the plants have been harvested like this since the 15th century.

Bruno’s sister Francoise, runs the local guesthouse with three simple ensuite rooms and lovely views over the valley. In

a dusty cold garage, their 95-year-old parents are taking off the outer layer of sweet onions by hand with a knife one by one. They do this smilingly seven days a week, for seven months of the year, beginning before breakfast and continuing after supper, getting through an onion mountain of 1000 kilos each week. Francoise’s parents (aged 76 and 81), live in the nearby village with a small herd of 25 goats, and make their own cheese. They, like her parents-in-law, who also keep sheep, have worked in onion production all their lives.

The family is happily self sufficient and over dinner we work our way through a range of nameless homemade aperitifs. Distinguished only by their various shades of pink, sweetness and potency, they are all made, along with jams and fresh juices, with whatever fruit they happen to have a surplus of. Philippe is proud of the generous harvests of aubergines, olives, tomatoes, salad leaves and turnips that their garden yields. Meat is usually a gift or a barter – pork sausages from a neighbour or a lamb from a family member’s smallholding ­- or purchased from the marchant ambulant (travelling shop). 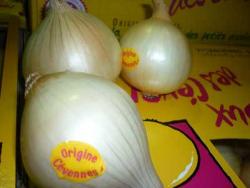 Francoise and her husband Philippe, both in their mid 40’s, used to work in a nearby silk factory until they decided to move back to the land when they both lost their jobs. Silk production was the only real employer in the Cévennes region for 60 years until the industry moved to China just over a decade ago. Philippe’s eyes light up when he talks about his new life: ‘I never created anything in my life and now I have made all this’, he says, waving towards the organic garden and swimming pool overlooking the terraced valley. Francoise smiles amiably as she places a lattice pissladiere of melting, caramelized sweet onions and anchovies on the table, the signature dish of the region.