Sourcing food locally is fast becoming a mantra for those who care about where what’s on their plate comes from. Yet venture into any supermarket and it’s piled high with produce from all over the world. Fruit, in particular, has often journeyed thousands of miles before it gets to the checkout, much of it grown in South Africa’s Western Cape. Scandalous, you may think, but an environmental audit throws up some surprising results. Rupert Parker sets off to investigate 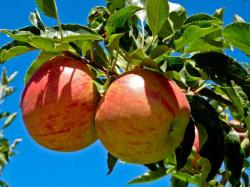 I’d never been to South Africa so, when the offer came up to visit Cape Town and tour the fruit farms in the Western Cape, I leapt at the chance. I also have a confession to make – back in the early 90’s I was making TV shows about food issues and Professor Tim Lang and I came up with the ideal of ‘Food Miles” as a way of illustrating the huge distances that ingredients travel to stock our supermarket shelves. It was a device to point out the scandal of fruit and veg journeying half way round the world at the expense of the British seasonal varieties, long before the words carbon and footprint had ever been paired together. So here was my chance to confront the evil empire of South African fruit growers in their lair and shake a stick at them. 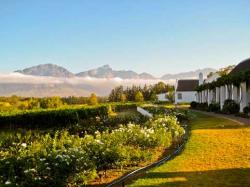 The first thing that strikes you as you arrive in Cape Town is just how beautiful the countryside is. They have a Mediterranean climate and the lush orchards and vineyards, covering the hills and valleys, carpet the landscape in greenery. 75,000 hectares are dedicated to producing 1.8 billion tons of fruit, just under half of that apples, and the other split between grapes and stone fruits – pears, nectarine, apricots and plums. That’s enough fruit, if put end to end, would circle the Earth 50 times, so I suppose it’s important that it all gets eaten.

Many of the farms are huge and have been in the same families for generations, and the farmers themselves are not small men. Good Boer stock, coupled with a healthy life style, means they tower over you and it’s certainly unwise to pick a fight. I did try my best and wondered why, 15 years after the end of apartheid, they still owned most of the land. They told me about well meaning government initiatives that bought up farms and settled them with non-whites, but sadly there’s a failure rate of around 85%. It seems the problem is lack of proper agricultural training – after all it takes special skills to farm on this scale. 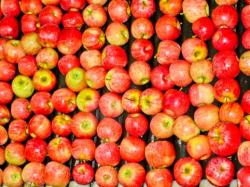 And they’re doing their best to improve their workers lot, usually paying 50% more than the minimum wage, and providing decent housing and crèche facilities. The British supermarkets have also been encouraging ethical programmes although often their approach has been contradictory, specifying good labour practices, but buying at the lowest possible price.

What’s certainly true is that fruit farming here is an extraordinary slick operation. Most organisations have their own pack houses and therefore picking to packing often takes only a matter of hours. The fruit is washed and sorted and then bagged before it’s shipped. The labeling room is awash with British supermarket branding and yards and yards of those horrible stickers that every fruit seems to have to wear these days. Sell by dates are also set here, which seems a bit ridiculous for apples that have to travel thousands of miles before they even get to the shelves.

So the big question, what about the food miles? Well first of all, if British consumers are going to demand fresh fruit in the winter, it has to come from the southern hemisphere . South Africa is certainly nearer than Chile, the other big producer of fruit, and most now comes by ship, taking around three weeks to get to us. There’s no excuse for air freight, though, but fortunately that practice seems to be dieing out.

Second, environmental audits show that storing fruit at low temperatures is incredibly energy intensive so producers are encouraged to get the fruit from tree to boat as quickly as possible. If we were only to eat European apples they would have to go into cold storage in the autumn, with a resultant greater carbon total than their South African cousins. 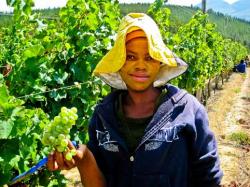 Yet it may be that the problem will resolve itself. Since the end of apartheid, the home market in South Africa has been growing every year. The rise of a black middle class means more people want to eat fruit. More interestingly, there’s been a miniscule rise in GDP in the rest of Africa and fruit is now exported to Nigeria, Benin, and Cameroon among others. Apples, in particular, are in great demand as they can survive long journeys on bad roads without refrigeration and can be sold individually in local markets.

For the moment, though, you pays your money and makes your choice. Ironically, you can tell where someone comes from by the sort of fruit they eat. Asians like things large and sweet, the aptly named Fuji being their apple of choice. Africans go for Golden Delicious whilst the Middle East prefers Royal Gala. In the UK, though, we like to be different – for us it’s small and sour and our favourite apple is Braeburn. So much for the legendary British sweet tooth.