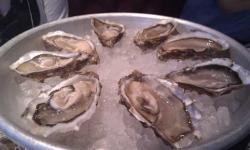 It’s easy to become disillusioned by Twitter-led food hysteria. As with people’s opinions on anything, you have to take them with a pinch of salt. One place we visited recently left me seriously and sadly underwhelmed, despite its great venue and decent, if not spectacular service – we waited so long for our second course a waiter asked if we’d finished our meal – ‘er…shouldn’t you know whether we’re done or not, mate?’.

Anyway, A had been before with a workmate and loved it. And I wanted to, I really did, I wanted to agree with all those I follow on Twitter, I wanted to raise my hand and say ‘Me too! Me too!’. But on this occasion, my first visit, half the dishes we ordered were poorly, nay badly, seasoned. One tasted so strongly of pepper you would have done well to recognise what was meant to be the principal ingredient. As though the chef was trying to hide the flavour, and no, the principal ingredient wasn’t meant to be pepper.

You can’t hide from the flavour of an oyster. It grabs you hard and if you don’t like them you’ll realise soon enough. 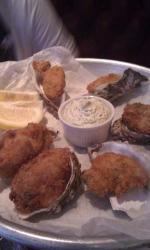 But I had been initially worried about going to Wright Bros in Soho. I went once before to their branch in Borough market and was quite put off by what I remember being snooty service, I don’t think we even went in after asking a member of staff about a table. If there’s something that really gets to me in a restaurant, it’s snooty service. If you pay for a product you should be able to expect to be feeling smiley about it after. I was nowhere near smiley.

I was even more concerned when I saw the entrance on Kingly Street, just behind Hamleys. My ‘too cool for school’ alarm, last heard somewhere in Shoreditch, went bonkers when I saw the imposing heavy wooden front door with no obvious clue you were at the right place, other than a small Wright Bros sign hanging close to the neighbouring pub.

I’d soon find out there’d been nothing to worry about. Inside, the restaurant is more inviting, with three sections and a terrace area in Kingly Court. The restaurant’s second Oyster Feast of the year is on the middle floor, though I have read the basement is the best place to eat for its atmosphere.

Tonight, though, atmosphere is definitely not a problem. Drinks are flowing, we chat with those on the next table, there is a talk from director Robin Hancock, who gives a brief oyster history and biology lesson, and there are the excellent bivalves themselves. 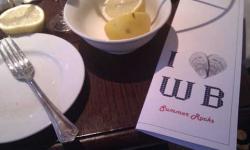 While I love food, I’m certainly no expert. Give me an oyster and I will be happy, but I wouldn’t be able to tell you what sort it was, which is why I enjoy this evening so much. It is that much easier to compare when tasting one after another.

It begins with a Bloody Mary-type shooter, complete with oyster, of course, then there are three different raw rock oysters and three cooked versions. Raw, we are served Carlingford Lough – creamy – Speciale de Clair Rock – salty – and Maldon Rock – somewhere in between. The Maldon, from Essex, is my favourite, beautifully, deeply creamy with just the right balance of seawater saltiness.

The three cooked versions are almost as good; the deep fried, panko breadcrumbed and peppery oyster, served with a tartar-like sauce, unbelievably meaty and creamy all at once. A, who has never been totally convinced by the shellfish despite my best efforts, is a convert by the end.