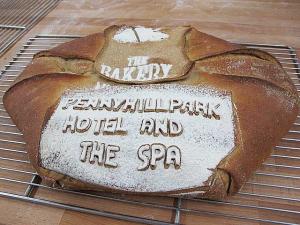 It’s hard to concentrate on a man teaching baking when behind him is a stack of delicious looking, freshly made, pastries and breads. Luckily I’ve been invited to help myself, so I do. This kind of pupil-friendly tuition was sadly missing when I was at school

I’m at Pennyhill Park, the luxury hotel near Bagshot in Surrey, for a demonstration of the baking course led by Denis Drame, the hotel’s Head Pastry Chef. From Senegal via Paris, Pierre Hermé and Le Manoir aux Quat’Saison, Denis is a master of patisserie and in charge of making sure the hotel guests always get the very best from breakfast to dinner. Today the England Rugby team are visiting the hotel so he has made extra fairy cakes. Only joking guys.

Pennyhill is so proud of the Bakery its been placed behind a large viewing window so that guests can watch Denis and his crack team turn out the baked goods. It’s not a big room but it is almost brand new, a state of the art bakery in fact. Traditional methods are used though with a large selection of organic buckwheat, chestnut and rye flours and water for the bread being drawn from the hotel’s own bore hole, yet another way the team can guarantee consistency day after day. 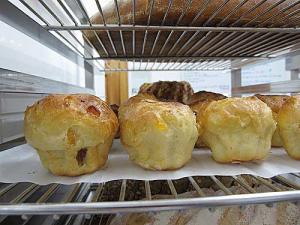 In fact so popular are the breads and pastries that the hotel also sells them to take-away; all the guests have to do is pr-order from their rooms. Checking out with a bag of bread still warm from the oven is a treat not to be missed after a stay luxuriating in the hotel, the Latymer restaurant and the Spa.

The baking master classes normally last a few hours but Denis quickly took me through what’s on offer for both individuals, conference delegates and corporate clients. First a discussion about yeasts and dough making. Nothing beats touch and feel to drive home a point and Denis, having kitted me out in a bespoke apron, is keen to show me what’s what.

‘See how the flour, yeast and water come together, ‘ he says as we peer into a giant version of a household mixer with outsize dough hook. ‘Use the lowest speed first, watch to see the dough come away cleanly from the bowl sides. You may need more water, all flours vary in absorbency.’ Once the magic point is reached the speed is increased for the ten or so minutes of vital kneading that will develop the glutens to give the dough the elasticity that traps the yeast gases and makes the dough rise.

At Pennyhill they make the day’s dough the previous day and let it rise slowly, in a fridge if need be. ‘Slow rising develops more flavour,’ says Denis flopping a large tray of lively dough onto the workbench. I can feel its silky texture and Denis points out the bubbles of air trapped inside it before he hands it over to Head Baker Stephane Gliniewicz, for a demonstration of baguette making.

It looks easy; Stephane measures out a piece for each baguette, using scales for consistency, and then sets to making the bread. The lump is shaped into a vague torpedo and then he elongates it with a few swift hand movements before stretching and folding it on the long side (see the video). Then as if making a plasticine worm he rolls it out, getting the all-important artisan pointy ends before adding it t to the cloth that holds the shape.

‘It’s so simple!’ says Denis, ‘anyone can do it. These guys have it easy!’ The team know the boss is joking; it’s a skill that comes only with practise and a feel for dough. I know because when I have a go the results are far from perfect. ‘It’s in the pressure, ‘explains Denis. ‘Start with the finger tips then begin to use the whole hand pushing down hard as you go.’ After a few tries, something resembling a baguette begins to form on the work surface and Denis and the team are encouraging, even if not exactly impressed.

‘Normally we would do more on bread, but this is a taster of the course,’ says Denis now manhandling a giant lump of what looks like butter onto the work surface. ‘This,’ he explains, ‘is sweet pastry. Let me show you how it’s made.’ He blends butter and icing sugar in a mixer to a smooth consistency then more icing sugar and ground almonds. Some egg yolk, salt and flour are then added, the flour helping to prevent the mixture from ‘splitting’ as he explains. The result is a golden yellow smooth pastry that, after a chilling in the freezer, is ready to be rolled out 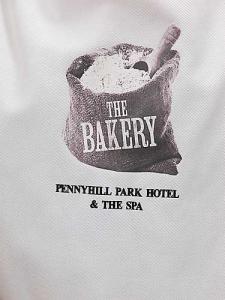 This time using a rolling pin rather than my hands, I try roll out a piece with the same uniform thickness all the way across. This isn’t easy but Denis shows how by using his whole arm from finger tips to forearm, equal pressure is maintained all the time The result is plopped into the tin and shaped before the almond cream is piped in. This I make by blending more butter and icing sugar, eggs, rum and a vanilla pod. ‘Always give the vanilla pod a short blast in the microwave first, ‘ is Denis’s tip. ‘It softens it and you’ll be able to scrape out even more of the delicious seeds.’

Piping in the filling is another test of dexterity; too much pressure on the bag and the coils are uneven. You have to squeeze all the time and the same way and you have to make a lot of tarts in a short time. Sliced poached pear is added to the top and it’s whisked away to join my bread and rolls in the oven. As the bread goes in, Denis pushes a button to add steam, creating a ghostly wail that echoes around the room. ‘The steam gives a crust, but at home a pan of boiling water in the bottom of your oven or a squirt from a plant mister will do almost as well.’

I leave Denis to go and have lunch at The Latymer, Pennyhill Park’s Michelin-starred restaurant and when I return a few hours later my warm bag of my bread and tart are waiting for me. ‘Baking is an art,’ says Denis, ‘but even when it’s not perfect it’s still great.’ He’s right and as I saw his beautiful pastries for Afternoon Tea go past I made a note to buy some icing sugar on the way home.

Classes are 120 minutes in duration and £80 per person including tuition, recipes, bread sample and your very own ‘The Bakery’ at Pennyhill Park Hotel apron