Annie Manson lives and works in Vejer de la Frontera, Spain, where she runs bespoke cookery classes in the heart of this historic Andalucian whitewashed village. Along with a sprinkling of sherry, topped up with fabulous Spanish wines, she ensures guests will head home inspired to bring Andalucian sunshine into their kitchens. Find out more at www.anniebsspanishkitchen.com 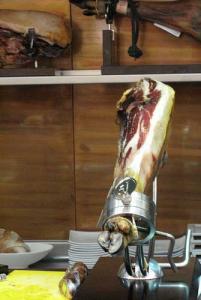 Without a doubt one of Spain’s genuine world leading gourmet delights is Cerdo Ibérico – the pork from the black Iberian Pig.

What makes this meat so incredibly special is that for the last few months of each pig’s life, they are allowed to graze free range Dehesas (acorn forests), munching their way through tons of bellotas (acorns), which have fallen from helm oak and cork oak. It is these acorns which gives the fat of the pigs its unique, sweet flavour.

When you see Cerdo ibérico in its raw state, you first notice how the meat is shot through with streaks of creamy white fat. This fat dissolves during the cooking process and flavours and tenderises the meat to such an extent that it must be one of the top edible gifts from Mother Nature.

The happy Iberian pig can only be bred in a few parts of Spain and there is nowhere else in the world that it will get this unique flavour. In Spain this region stretches from as far south as the Aracena region, around Jabugo – the jamón capital of Spain – and then up to as far north as Salamanca.

The acorns are the key to the quality of the meat. The acorns make these pigs terribly thirsty, so they run around looking for water, making them athletic little things, developing fine bones which are evident in the bone of jamón ibérico (hams), usually produced from their rear legs. When I first came to live in Spain, my Spanish friends would tut, tut and finger wag at me when I pulled the fat off a slither of jamón ibérico (also refered to as Pata Negra because of their black hooves) and cast it aside. They regard this fat as a delicacy and I now tend to agree. Its sweetness literally melts in your mouth. Wrapped around a tiny picos (break stick), followed by a sip of Fino, is simply divine.

Breeding these pigs is no cheap task – this is the opposite spectrum of intensive pig farming. This is then reflected in the price which makes jamón ibérico de bellota the most expensive ham in the world. 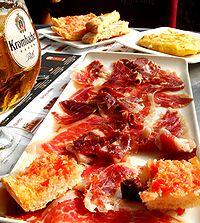 The most expensive and best quality is called jamón ibérico de bellota (acorn). These pigs have been free range, dining on the carpets of fallen acorns on dehasas in Southern Andalucía for the most part of their lives. The more exercise these pigs get, the more the fat blends into their muscles and the tastier the meat becomes. It is considered that 5J [“cinco jotas”], is the King of jamón bellota.

The next grade is called jamón ibérico de recebo. This ham is from pigs that are both pasture and compound fed a combination of acorns and grain.

The third type is called jamón ibérico de pienso, or simply, jamón ibérico. This ham is from Iberian pigs that are solely compound fed on grain and some acorns. The term pata negra is also used to refer to jamón ibérico in general and may refer to any one of the three above types

It is important to note that Jamón Serrano comes from Cerdo Blanco (the more common white pigs) that is solely grain fed. This comprises around 90% or the pork and ham production in Spain. It is the cheapest of all the jamóns. It’s still delicious and perfect for sandwiches or cooking should your recipe call for jamón.

Another important thing to understand – in terms of price and quality – is which leg you are buying. A jamón ibérico is normally the hind leg of the pig. A paletilla is the front leg. Nevertheless, a paletilla can have an excellent taste and undergoes the same processes of ham-making. The difference is that a paletilla is smaller and has more fat. Therefore it’s cheaper. So if you’re considering buying a whole jamón and can’t afford a Jamón Ibérico de Bellota, ask for a Paletilla Ibérico de Bellota. It is usually half the price. 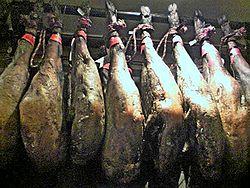 In the UK it’s pretty near impossible to buy Cerdo Ibérico but here is a marinade that will enhance the flavour of pork that you can buy. It’s always an idea to check out the provenance of the pork you’re buying. Was it a happy pig? Did it graze on tasty pastures? Better that than spending its life confined in small spaces by metal bars. When correctly administered (yes Dr.) marinades can bring out flavours – wrongly administered and they can kill them all. Fennel seeds and pork are an Italian marriage. Italian salamis are often are spiked with fennel seeds. It’s said that Roman Legionaries would chew on fennel seeds as they marched to suppress the pangs of hunger. I have tried this. I have even tried being massaged using pure fennel seed oil – it doesn’t work……..

Presa Ibérico is my favourite cut of Cerdo Ibérico. Presa is the muscle between the top of the shoulder and the beginning of the loin. In UK, pork shoulder works brilliantly, preferably un-rolled so the flavours of the marinade can sink into every nook and cranny. This marinade will also work well with any cut of pork for quick BBQing. You only need to marinate for a couple of hours

Finally, it should be noted saturated animal fat is actually good for you as not only is it the best quality fat; it also leaves you feeling more satisfied. Animal fats give us energy and boost the immune system and can actually lower bad cholesterol.

I prepare this dish when I have people for supper or lunch at short notice if I’m using escallops or chops. Note that you should never crush garlic for a marinade. As soon as you BBQ or sear the meat – the crushed garlic will be the first thing to burn. Burnt garlic not only flavours an entire dish, it is also indigestible. This marinade requires unpeeled cloves of garlic, given a huge thump with the side of your fist or the back of a sturdy knife, until they split.

Assemble all ingredients in non-metallic dish. Stir with fork. Add slices of Pork and mix. Leave for up to 2 hours

BBQ or grill on each side for a few minutes. It is perfectly acceptable to serve this pink – not rare – just pink. It’s at its best when pink

If using a cut like unrolled shoulder marinate in the above for a day or so, turning it when you remember, then remove from marinade and discard any garlic cloves attached to the meat and seal in a very hot oven proof pan. Pour the marinade – including the garlic cloves and a litre of cider over the sealed meat. Cover tightly with foil and roast at 140 deg for about 2 hours – checking to see if you should add more cider from time to time. If using a shoulder or leg with prepared crackling, it’s not necessary to seal and definitely don’t cover with foil if you want your crackling crispy!

This is fabulous served with Pea Puree, Warm Potato Salad with Sundried Tomatoes & Onion and Roasted Cherry Tomatoes – all of which can be prepared well in advance