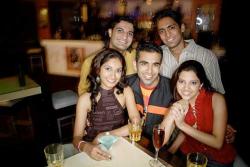 We were welcomed with bubbles, a Perrier Jouet Champagne NV served with a buttery Waterloo soft cheese. Sommelier Kate whisked around a tray with smudges of cheese as the gang swooped.

We were trying six wines paired with cheeses at the splendid – but roaringly noisy – Bedford & Strand wine bar in Covent Garden. The event was organised by the Asian Dinner Club – on this occasion, alas, no dinner at the request of the club’s voraciously highflying members who preferred to network rather than scoff.

Former investment banker, glammy mum of two and entrepreneur, Salima Manji, set up the club in 2008. Disillusioned with the dating scene, both for her newly single self and her friends, Manji decided to play matchmaker. Meals and drinks are staged at some of London’s luxury gaffs including private members clubs and posh restaurants. There are now apparently 500 choosy, professional Asian singles on her books, none of whom, I’d guess, would be looking for a struggling freelance like me.

Of course, I’m not looking. I was here to write this up. So after the Champagne, we got on with a Calitera Cabernet Sauvignon 2007 from Chile whose cherry finish nicely counterbalanced the acid. Served with this was a Montgomery’s Cheddar, a riotous, blowsy cheese well tamed by the wine’s decorum. Next, little glasses were served of a Dashwood Sauvignon Blanc 2007 from New Zealand – a mossy, citrus number pairing well with the lemony Dorstone goats cheese. I’m not a fan usually of goats cheese but this artisan, west country morsel was less heady and pungent than usual. I loved the spicy Rey Don Garcia Crianza Rioja 2005 from Spain, paired, unsurprisingly, with little fresco Machego. My favourite, however, was the fortified Grant Burge 10-year-old Tawny from Australia, which, fawn-like in colour, tasted like caramel tea. Finally, we had a Mas Amiel Vin Doux Naturel France 2005, which by this stage, I could no longer taste, tongue blissfully blitzed from the chocolate souffle served alongside.

And the people? There were around 12 professionals in all. But the Bedford is possibly not the best place to stage an intimate dating evening, rowdy and packed as it was, the Asian daters penned into one side of the bar, women clinging to women and the few males lording over the territory. I, shy, retiring wallflower, clung to the bar like a bobble on mohair. I did feel the poor relation to the glamourous City women, barristers, dentists, business people and IT consultants, all networking like crazy, their business cards flashing in the glint of the optics. Three related women were giggling, their arms interlocked for moral support. An older, distinguished businessman told me how he’d sold Indian vodka to the Russians – an impressive feat indeed. With none of my own extravagent exploits to boast of, I slunk home, but not before I’d taken another swipe at the cheese.