It was approaching 6.30 on a wet Friday evening in November and there was I walking up Charing Cross Road to attend an evening with Jose Pizarro in The Gallery at Foyles, attended by the cultural attaches of Latin America, Spain and Portugal. As I arrived I was handed a nice chilled glass of Cava – the first of many – and chatted with some of the assembled guests before taking my seat for the main event. 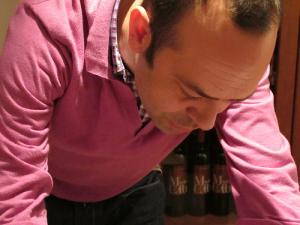 The evening was to take the form of a discussion between Jose and his ‘interviewer’ Martin Morales, who, apparently, is due to open London’s first Peruvian restaurant in the spring in 2011. The discussion was led by Martin who started by talking with Jose about how the introduction of foods, like the potato and the tomato, from one country to another had influenced those individual countries’ cuisines, their current style and development. Jose then told us about some of his favourite dishes, and spoke fondly about those family recipes that, however hard he tries, he doesn’t quite get them to taste like his mother made. I think that goes for all of us.

Jose also talked a little about what he’s been doing since his departure from Brindisa, like the publication of his recipe book ‘Seasonal Spanish Food’ in the early part of this year. He also spoke a little about his future plans. Apparently he is currently working on his second cookbook, in which I believe he plans to feature some of those family recipes. He didn’t give an indication as to when this might be published, but of course, it’s something to look out for in the New Year. He also spoke briefly about his plans to open a new sherry bar and a restaurant, which will feature tapas and focus on seasonal foods, both of these will be located in the London Bridge area.

The formal discussions over, the drinks and canapés began to arrive. Several tasty little morsels journeyed around the room, sadly, I had had a fairly substantial lunch so my appetite, for food at least, was limited. I did taste some lovely hand carved ham (and had a go at carving it myself – quite successfully actually) and sipped Cava while I chatted with other foodie writers and for a short while with Jose. This was a very pleasant way to spend a few hours on a wet Friday evening. And it was good to get some idea of what we might expect from Jose in the future.

So after the evening drew to a close, I set off on my way back down Charing Cross Road, immediately slid and did the splits on a row of metal utility covers, nothing to do with the drink I assure you, well I don’t think so, then made my way home just a little embarrassed.

Jose Pizarro’s introduces us to anchovies