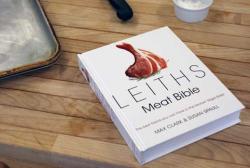 Leiths, the prominent cookery school based in west London, launched the latest in their ‘bible’ series last night with a melange of perfectly cooked meats in their shiny corporate kitchen.

Max Clark, who co-authored Leiths Meat Bible with Susan Spaull, was on hand to run attendees through the cooking of several different steaks, including lamb, beef and, rather more unusually, antelope and zebr

The antelope appeared a marvellously rich maroon colour before cooking, not dissimilar to a raw tuna steak, and tasted incredibly lean when served. The zebra offered the same slightly gamey sweetness as the antelope, with both animals featuring in the exotic meats section towards the back of the new book. When questioned on the inclusion of recipes using snake, alligator, kangaroo and the like, Max spoke of the need to recognise new food trends and increasingly adventurous cooks. Indeed, even during the three and a half years it took to write the book, there has been growing interest in rarer types of meat and there is a hope that Leiths will prove to be a trailblazer thanks to this less customary chapter.

There is plenty, however, for the more traditional carnivore in this near 550 page tome and not just recipes. All the advice you’d expect on buying, preparing, cooking and carving meat is laid out at the beginning and it was made clear in the kitchen last night that the authors believe in basic, solid cooking techniques over sheer volume or cost of ingredients.

Though enough to make a vegetarian bawl like an overcome toddler, the Meat Bible is a lock, stock and barrel journey through carnivorous gastronomy and worthy of its heady title. And after all, a dnner party would never be complete without the recipe for a starter of python nuggets.