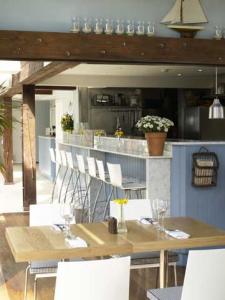 If anything marks the start of summer in London then it is the opening of The Summerhouse on the banks of Little Venice in Maida Vale. Especially when you are greeted on arrival with a fruity pimms cocktail called the Maida Mojhito and the sun is setting over the capital.

Inspired by the New Yorker penchant to escape to beach houses in America’s wealthy Hampton’s, this pop-up restaurant is the brain child of Mitchell Tillman of The First Restaurant Group and is open from April until October.

The Summerhouse has a nautical theme to compliment its waterside setting designed by Meredith Tillman. Mitchell’s sister. A cooling white washed interior, pebbled flooring, flags, boats and bottles with sunflowers are strewn on tables and scattered candles give a distinctly bohemian feel. It also has its very own mooring space so those passing by can pause for a bite to eat en route.

The menu is seafood inspired and on opening night a variety of canapés allowed me to sample some of the highlights. In particular the popcorn style shrimp served with a sweet chilli sauce was perfectly cooked and the sauce had a great kick. Another favourite was the mini fish and chips served in a sea-side style cone and a prawn and avocado cocktail served with a bloody mary sauce was fun, tasty and certainly summery. The swordfish steak served in ciabatta with mango salsa and wasabi mayonnaise is also not to missed I am told.

The cocktail menu is extensive with The Waterside Cooler of Havana rum, fresh lime juice, orange liqueur and ginger beer a favourite according to the bar staff, though the champagne and lavender mix served with a sprig of real lavender proved a hit on opening night.

The atmosphere at The Summerhouse is unmistakably laidback due to the fantastic canal location. With a food and cocktail menu to rival any central London eatery and a limited opening season adding a touch of exclusivity, this is a must do dining experience.