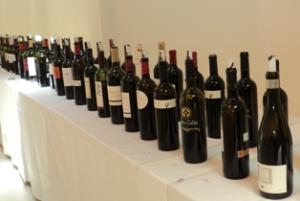 On, reportedly, the hottest day of the year, when the temperature in London had been predicted to rise to a sweltering 32 degrees I attended the New Wave Spain wine tasting at The Worx in Heathmans Road, Parson’s Green. The room in which the tasting was held was a vast space on the upper floor, which had no ceiling as such, you just looked straight up to the underside of the roof and the many Velux windows that are in it. It was hot.

The wines were lined up on long trestle tables set up end to end, a little like the set up for a jumble sale or a bazaar, for us to help ourselves to as we made our way along. Spittoons were lined up centrally along the length of the room, vile, but necessary, the scene was set.

There were 28 whites and sparkling wines, a few rose and a small selection of fortified wines, but the bulk of the 119 wines there for the tasting were reds. This, potentially, was a marathon of wine tasting. Fortunately the place was not overly packed whilst I was there – how I hate having to squeeze past wine buffs who stoically hug (or should I say hog) the table, never moving more than a few inches from it, in order to charge your glass with a tasting pour of wine after wine. Then go through the routine, swill around the glass, sniff, take in a mouthful, swill around the mouth taking in some air, make notes then spit out. There was one wine with which I did not follow this protocol. I thought, retailing at £250 a bottle, I kind of had to drink it and actually came close to going back and pouring a full £40 worth into my tasting glass and savouring every sip.

Anyway, to the tasting proper, I tried most of the whites and sparkling wines and some eleven of the reds before deciding, having been at it for nearly three hours, that I really needed to be more selective. Helpfully, the judging panel for the 2010 New Wave Spanish Wine Awards had made that a great deal easier. Their selections from the show had been highlighted in the catalogue – I decided to try those first and if there was time, work my way though some of the others there.

Inevitably as you are using the same glass for the whole tasting there will be some contamination of the next wine on every occasion, albeit not too much, but to the purist, enough. Fortunately I’m not a purist so could cope with this. For me, the highlights of the tasting were:

Castrocelta Albarino 2009, which had the award for best white under £10, had a delicate floral, fruity nose, and on the palate it had some body with nice acidic zesty citrus flavours and a long tangy finish. At £9.95 from Indigo Wines it would make a great summer drink.

The Figuero Tinus 2006 had vanilla notes on the nose, some tannins, a medium bodied red, soft on the palate with forest fruit flavours and slight pepperiness to it. However, at £250 a bottle through Vinedos and Bodegas Garcia Figuero, perhaps not a wine to quaff every day.

The Contina Vina del Olivo 2007 had red fruit notes on the nose and on the palate had good forest fruit flavours with some acidity and dry tannins in its finish. At £49.99 from Hatch Mansfield this was voted the best Rioja in the show.

The Thalarn 2008 had spicy red berry fruits on the nose, very soft on the palate with spice and pepper on the palate and a tannic dry finish, from Epicure Wines, it retails at £27.

The Finca de Luzon 2008 had a creamy fruity nose and raspberry came through on the palate with a pepperiness and acidic dry tannins in its finish. Unfortunately no UK contact was noted.

There were many more very good wines, way too many to list here, these were but a small number of those I liked, maybe you should start working your way through some of the vast range of wines from Spain available widely and decide for yourself which you prefer.