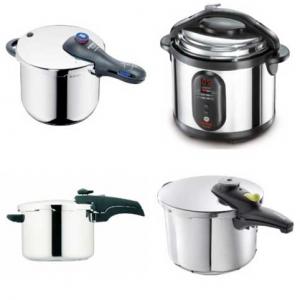 In the age of fast food and microwaves it is suspect to hear about something that is fast and healthy. There is and it was invented a couple of hundred years before those torturers of taste buds and cooking began to mar our kitchens. It’s the pressure cooker!

Get those images of gigantic pots, chugging like a steam-engine on the stove-top out of your head. New generation pressure cookers release almost no vapour, can cook faster than a speeding microwave and have a several new safety features.

Modern pressure cookers are sleek, shiny, well-insulated stainless steel pots (or electric appliance) with a very special lid that seals shut and does not let any heat, cooking vapour and flavor escape. The contents inside begin to boil and the vapour has nowhere to go so the pressure begins to build inside until it reaches 100KPa (or 14.5 PSI). The high pressure inside the pan raises the boiling point of the water from 100° to 120° degrees, reducing cooking times substantially and increasing vitamin, mineral and flavor retention – especially when used with a steaming basket.

When the pan reaches pressure, the safety mechanisms kick-in. The lid locks closed to keep you from accidentally opening the pot and burning yourself with the super-heated contents. A spring loaded valve gently lets out any excess vapour if the internal pressure exceeds the pot’s limit, and a secondary redundant silicone or rubber valve kicks in in the eventuality that the first should become accidentally plugged by the contents. Some manufacturers have even more proprietary safety mechanisms – a Swiss one claims to have five!

• Brown – this is the first step in many recipes, like risotto, and can be done before or the lid is placed, or after it is removed.
• Boil – just add enough water to cover the food by half.
• Steam – insert the accessory, or a metal-foldable steaming basket with 1 cup of water.
• Braise – brown the food in the pan, and then add cooking liquid (wine, milk, broth, water, and herbs).
• Stew – throw everything in and close the lid.
• Roast – place the meat and vegetables inside with just 1-2 cups of cooking liquid.
• Reduce – after the lid is removed, cook on high flame to reduce liquids if desired.
• Water Bath – place a heat-resistant bowl (ceramic, Pyrex, stainless steel), covered in aluminium foil on steamer basket inside pressure cooker with 1 cup of water.
Need a little inspiration? Try Risotto or Rabbit Cacciatora in your pressure cooker. Once everything is in the pot, the risotto is ready in seven minutes and it only takes 15 to cook the rabbit under pressure to fall-off-the-bone tenderness. 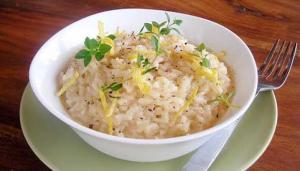 The magic ratio here is “100g rice:250ml broth.” Which is handy, because this is the amount you will need per serving if you need to increase or decrease this recipe.

Soften the onion in your pressure cooker, add salt and pepper. When onions are softened add the rice and lightly toast it to release the starch. When you add the Arborio rice to the onions first it will turn it from white to translucent as it absorbs the oil, then in about a minute back to white. Wait until just a couple of grains look golden and your rice is toasted! Then, add a swig of white wine and stir until it has evaporated. Add the broth, mix and close the top immediately.

Close and lock the lid of the pressure cooker and turn the heat to high. When the pan reaches pressure, lower the flame to minimum heat and begin counting 7 minutes cooking time under pressure for al dente risotto, 9 for well done.

Near the end of the cooking time, I like to pick up the whole cooker off the flame and swirl it around to feel if it is still very liquid inside. It should feel a little dense but not soupy.

When the time is up, put the whole pan in your sink and run a little cold water on the top to lower the pressure quickly and open it to stop the cooking.
Open the pressure cooker with the quick-release cold water method by bringing it to the sink, giving it a little jiggle to settle the contents inside, and running cold water on the top until the pressure subsides and you can open the top.
If the risotto inside is just a little wet, it is perfect the risotto will absorb the liquid by the time you serve it to your guests. If it is still very wet, put the open pressure cooker back on a medium flame to bring to the right consistency. 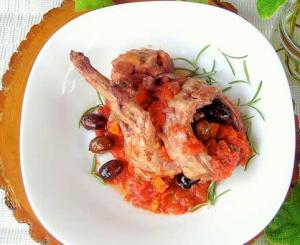 This recipe only requires a pinch of salt because the rest of the saltiness will come from the salted olive brine. If you substitute the olives for another type, adjust the seasoning accordingly.
1 Rabbit about 1kg, legs separated and body cut into 3 or 4 slices
1 cup of flour
1 Onion, diced
1 Carrot, diced
1 Celery Stalk, diced
1 Garlic Clove, smashed
1 sprig of Rosemary
1 sprig of Sage
1 pinch of salt and pepper
1 cup Red wine
1, 400g Can of whole tomatoes, drained

Marinate the rabbit meat for a minimum of four hours prior to cooking by placing the rabbit pieces in a large bowl with parsley, bay leaf, roughly sliced onion, one cup of vinegar and one cup of white wine and enough water to cover the rabbit. When 4 – 24 hours have passed, discard the marinate, strain and dry the rabbit meat pieces before cooking.

Fill a measuring cup with salted black olives, then add water to the 1 cup mark – set aside and do not discard the water.

In your open pressure cooker, with the top off, on a medium flame add olive oil. When the oil is hot, lightly flour the meat pieces and place in the pressure cooker to sear. Turn over once and when browned on both sides pull out of the pan and set aside. Turn off the flame and add a splash of wine in the hot pan and scrub all of those delicious bits of seared rabbit stuck to the bottom of the pan and set aside to use later.

Add a tablespoon of fresh olive oil and soften the chopped onion, carrot, celery with the sage and rosemary sprigs and a pinch each of salt and pepper. When the vegetables have softened add the meat back in the pan with one cup of red wine. Let everything simmer in the wine in the uncovered pressure cooker for about 10 minutes, swooshing the contents around occasionally.

Give the contents one last stir and then add the olives with their liquid, brown bits you set aside from browning the meat, tomatoes and close and lock the lid of the pressure cooker. Turn the heat to high and when the pressure cooker reaches pressure lower the flame and begin counting 15 minutes cooking time. When the time has passed, release all of the vapour, unlock and open the lid and move contents to serving dish. If the tomatoes are still whole, give them a light squeeze with the tongs – and don’t forget to remove the remaining stems of the rosemary and sage springs!

And if you fancy slow, why not try our slow cooker test? 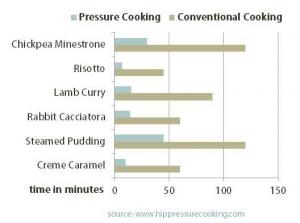 Time Comparison & Recipe Photos:Laura Pazzaglia and hip pressure cooking website (http://www.hippressurecooking.com)
About the Author: Laura Pazzaglia is the cook and photographer behind hip pressure cooking (http://www.hippressurecooking.com), a blog to inspire others to use their pressure cookers more often by posting unexpected and delicious recipes with easy-to-find ingredients, vivid step-by-step photographs and recipes in both U.S. & metric measurements. She has lived in four countries, speaks three languages, has two kids and, currently, her cooking laboratory is located in Anzio, Italy and features three pressure cookers and a stunning view of the Mediterranean Sea.