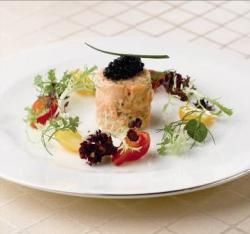 Award winning health journalist Peta Bee, who’s just teamed up with Singapore Airlines, has found that the food passengers eat during a flight can have an impact on their ability to cope with the stresses of long-haul travel as well as their actual mood upon arrival.

Peta says ‘It is clear from research that the type of foods you eat before, during and after a flight can influence your enjoyment of flying as well as affect how well you feel afterwards. Having a good variety of healthy dishes is an increasingly important factor when it comes to choosing an airline for long-haul flights and Singapore Airline’s attention to its in-flight cuisine is at the forefront of this growing trend.”

So what does Peta suggest passengers tuck into? Here are his recommended dishes from the Singapore Airlines menu, chosen specifically to help ease each travel related problem.

To minimise jet lag Peta advises travelers to use meals as ‘time cues’ for your body. In flight go for a light, low calorie meal like Mee Siam, Malay-style spiced rice vermicelli because you should arrive at your destination slightly hungry. If you then eat a high protein meal when you land you’ll be able to say active, helping you switch to your new time zone.

Sufferers of travel sickness should avoid salty foods but keep an eye out for anything containing ginger. Ginger is well known to quell travel sickness so choosing something like soya chicken with pickled ginger in ciabatta should help.

If you have a fear of flying this can lead to quite uncomfortable levels of anxiety. It’s worth noting that Vitamin B from whole grains, fruit and vegetables has a strong effect on the nervous system so it can naturally reduce stress. Celery also has a tranquiising effect on the nervous system so look out for that too. Peta suggests eating stir-fried fish filler with celery in garlic sauce, buttered vegetables and potato gratin to combat in-flight nerves.

As you may or may not know, Singapore Airlines is highly respected for it’s good service and gourmet meals, which is no surprise seeing as the culinary consulting board which chooses the food for flights comprises of top Michelin-starred chefs including Gordon Ramsay, Yoshihiro Murata and Gorges Blanc. In fact Singapore Airlines are so proud of their food they’ve even released a cookbook called Above and Beyond based on “the positive customer feedback Singapore Airlines has received over the years for its in-flight gourmet offerings”. Let’s face it there aren’t many airlines in the world who can claim they’re food is so good that people would like to replicate it at home!

To find out what all the fuss is about you can read our review of the in-flight food.
You can also check out what we made of the Above and Beyond cookbook and some recipes too.