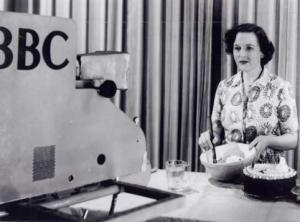 A living legend, Marguerite Patten has influenced generations of home cooks through her TV and radio programmes, books and cookery demos during her 94 years. Her practical advice and endless creativity has seen the nation through war time rationing and several recessions and she is currently championing the resurgence of home baking, in partnership with Stork margarine. She talked to Caroline Sargent from her home in Brighton.

‘Did you know the chap who invented the AGA was a Nobel Prize winner? People love them, don’t they? Everyone who owns one says the same, they all speak in terms of love. I’ve cooked on them in the past and have always admired them. Wonderful for baking!”

So begins my interview with the country’s longest surviving cookery doyenne, Marguerite Patten. Age and arthritis may have slowed the body but the mind races at lightening speed and she has plenty she wants to share with me.

‘Now the thing with baking is it’s much more difficult than a stew or a soup. You must stick to the basic recipe and get the right proportions of eggs, flour and fat. When I got my OBE (for services to the art of cookery, in 1991) the Queen said to me, ‘Cooking is truly an art” and I said, ‘No Ma’am, it is a science.””

I am certain that the Queen did not argue otherwise. This was after all the Ministry of Food’s voice of authority she would have heard on the airwaves through and post the Second World War, opining on how best to feed a family of four on limited quantities of ‘national bread’ and ‘national margarine’.

In her time she has advocated many gadgets and foodstuffs, from Spam and offal to pressure cookers and microwaves, preceding the ‘Delia effect’ by some decades. Her enthusiasm for Stork is long-held and, although puritan foodies might balk at its formulation, there’s no denying it has a place in today’s time-poor, convenience kitchen.

‘Stork is softer and lighter and mixes wells with the other ingredients so instead of adding things one at a time, put it all in at once and give it a jolly good cream. It’s so much easier and quicker. Victoria sandwich is a favourite of mine and only gets its light texture and excellent flavour from Stork, which I think is the essential ingredient.”

First appearing in the 1920s, Stork became a symbol of hope for households everywhere during wartime rationing, with the introduction of the Stork Cookery Service. Known for its consistently reliable baking results, margarine became the key ingredient in producing light, fluffy cakes and short, crisp and flaky pastry. The service was influential in helping housewives return to the kitchen and inspiring them to bake. I particularly like the sound of the Stork Wives Club, whose sprightly newsletter helps you identify ‘which kind of wife you are’. 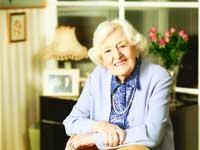 ‘I love all forms of cooking,” exclaims Marguerite. ‘I used to help my mother who was a lovely family cook (widowed when Marguerite was just 12 years old). We used to chat and make cakes together. Unfortunately it’s hard for me to stand and cook now so I sit and let food processors and mixers help me.”

After a long and distinguished career that has included regular stints on Radio Four’s Woman’s Hour and the BBC’s Food and Drink programme, among others, the writing of 170 cookery books – with sales of over 17 million worldwide – and frequent talks, demonstrations and charity work, Marguerite is in no mood to retire. Her latest book describes the joys and benefits of using pressure cookers: ‘Makes an old carrot taste like a new one. Everyone has one stuffed in the back of the cupboard or in the attic. If you want to save time and money, get a pressure cooker.”

She is also still hosting cookery demonstrations, the next one at the Imperial War Museum, London, in support of their Ministry of Food exhibition (runs until January 2011), ‘I do the talking and I get a young chef to do all the hard work!”Ã¢â‚¬Â¨Ã¢â‚¬Â¨Her energy is remarkable, making dynamic young protégés like Jamie Oliver look positively lazy. Although she says she ‘admires all television chefs in different ways,” she has a soft spot for Jamie who consulted her before making his own Ministry of Food series and other projects.

‘He came over for lunch and we were sitting there when he suddenly banged his fist on the table and said, ‘Do you realise Marguerite, no one sits down for lunch around the table anymore?” He cares a lot about people. I agree with him in that there’s not enough communication at meal times these days.”

And so to the million dollar question: to what does she attribute her lasting good health and vitality?

‘I had a mother who despite being a busy lady grew her own veg and we always had masses of fresh produce when other families may have had only one or two vegetables to cook with. I have a wonderful family and home life and my work has given me so much pleasure. I love gardening and want to get out and do the weeding myself but can’t anymore so I supervise other people! I’m watching the man mow the lawn right this minute. I have a lovely view from my window…”

Celebrating 90 years of Stork, www.bakewithstork.co.uk is packed with new recipes, plus some modern twists on old home baking classics. There are also baking hints and tips from pastry chef Phil Vickery and Marguerite Patten.