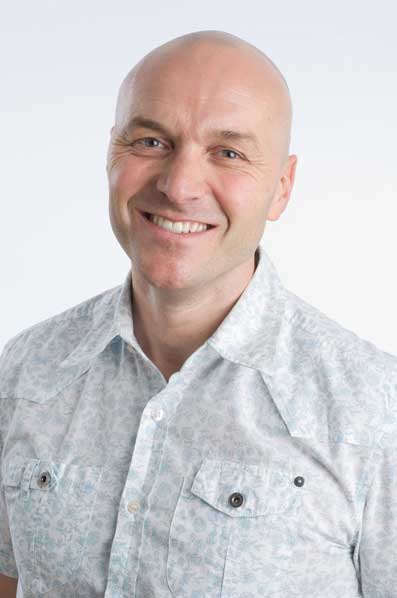 Cheers to celebrity chef, Simon Rimmer, who has finally made vegetarian food sexy. Although not a veggie himself, Simon became passionate about cooking exciting veggie food when he opened Greens vegetarian restaurant in Manchester in 1990. He’s gone on to write a vegetarian cookbook and appear on TV shows such as BBC Two’s Saturday Kitchen and Something For The Weekend and UKTV Good Food Live. He’s even appeared on Mastermind! Simon, who’s married to Ali and has two kids who also love cooking, will be appearing in the Summer Kitchen at The BBC Summer Good Food Show at The NEC Birmingham from June 10-14. Here he tells Julia Shaw about his foodie passions.

What got you into cooking?

‘It was kind of by default. I bought a vegetarian restaurant in 1990 and taught myself to cook. I’m not a trained chef, so I actually learned by the seat of my pants. I was spurred on my desire to chat up the girls, that’s why I bought my first restaurant. Women love a man who can cook. I didn’t intend to be a chef, I thought I was just going to be front of house and swan around, but I ended up not being able to afford to employ anyone so I thought, ‘I’m going to have to cook.’ There was no master plan. My mum and dad are both good cooks, so I suppose I’ve always been surrounded by food, my grandparents both cooked too.’

Are your kids vegetarian?

‘No, but we don’t eat lots of meat. I believe that you have to let kids decide for themselves about what they are going to eat. They need to make an informed decision.’

Do you cook with your kids?
‘I do actually. In fact I made chocolate cake with them Hamish, my five year-old the other day. They were doing fractions at school and the teacher said, as a passing remark; ‘you should cook a cake with your dad and cut it into quarters then you, your mum, dad and sister can have a piece each.’ So we did and he loved it. Cooking and maths at the same time. Great stuff!’

Is there enough done in schools to teach kids to cook?

‘No, not really. I think the problem is we’ve got three generations of adults who don’t cook. I cooked when I was at school, we need to get more people cooking and school is the obvious place to start. Every kid should be able to cook simple dishes.’

What’s the one thing that you hope that people will take away from the BBC Summer Good Food show?

‘That it will make them go in the kitchen. If you inspire people to make the decision to go and buy great ingredients and cook with them-maybe things they’ve never used before- then that’s an achievement. I think it’s our duty as well, as so called ‘celebrity chefs’, to get people back cooking. I’ve never been the biggest fan of the high alter of food. I think food should be straightforward and accessible to everyone. When chefs demonstrate cookery on TV it has to all be about entertainment. You inspire people through entertainment. But they shouldn’t be ‘oh, look how clever I am’ sort of cookery demonstrations. They should be really straightforward so people come away thinking, ‘oh, that was easy. I’ll give it a go. Everything I show on TV or at the BBC Summer Good Food Show is really easy using easy to source ingredients. You won’t find me using hand-picked saffron from the lower hills of an Indonesian mountain picked by left handed virgins, for example!’

You’re not a veggie yourself. How did you get your reputation as a vegetarian expert?

‘It was opening up my first restaurant really in Manchester. It was already vegetarian when I bought it, a bit scruffy and down-beat with a mainly student customers, so I decided to keep it vegetarian. It wasn’t well run before, but the area it was in was up and coming, so I decided to make a real go of it and offer a much more sophisticated vegetarian experience. It became really popular. We were turning away 600 people a week, so we had to expand. We still have to turn away about 250 people a week. A lot of our customers are meat eaters. We do really exciting food that happens not to have meat in it.’

Why do you think people still think vegetarian food is boring?

‘There’s that whole thing associated with veggie food, a political agenda. A lot of it is denial. I can’t eat that, or I won’t, and a lot of non vegetarians just don’t get it, but vegetarian food is absolutely delicious and so exciting to make. I think more people are in tune now with what veggie food is all about and appreciate it, even if they aren’t vegetarian. Top restaurants now offer fantastic vegetarian choices, and thankfully the days of veggies being offered veggie moussaka or a cheese omelette are over, but there is still some resistance. I think a lot of chefs still have that aversion to cooking vegetarian. They just don’t seem to be able to think creatively about vegetarian food. They try to do veg and two veg and that doesn’t work. My theory has always been not to replace the meat. We do really tasty veggie meals without silly made up names, so the customer knows what they’re getting. For example our chic pea and goat’s cheese pie with mash and mushy peas goes down well.’

Do you think local, seasonal produce is important?

‘Yes, and no. There’s a lot of snobbery now around the ‘local and seasonal’ label. How come it’s OK to use imported lemons from Amalfi, for example, but not asparagus from Spain? I almost feel that the danger with the locally sourced movement is a lot of people jump on the back of it. And just because food is locally sourced doesn’t always mean it’s good. I eat in a local restaurant where the beef is flagged up as locally sourced and it’s rubbish. You should always use the best ingredients available. I like using seasonal vegetables. Asparagus is probably my favourite. We use asparagus from Formby, which has a very short season, but it grows out on the sand dunes near the restaurant in Didsbury. Local purple sprouting broccoli is great too and I love the summer when you get fantastic fresh broad beans and peas in season and then the parsnips and turnips in winter.’

We all waste so much food. Where are we going wrong?

‘I think the good thing about money being tight right now is that it will stop people chucking out so much. We’ve had ten years of affluence and greed that’s caused so much waste, it’s about time people got more real about their food consumption.’
What’s your top tip for anyone wanting to take up cooking?

‘If you can’t cook you should get together a really small portfolio of recipes. For example, a good soup, a spaghetti Bolognese and a pudding. Learn those until you’re perfect at them and can do them with your eyes closed. Learn about seasoning and the flavours and the texture too. Then, when you feel confident with them, add another three, and then another three to very gradually build up your repertoire. There’s no point in saying: ‘Right. I’m going to learn how to make Thai.’ That’s too intimidating.’

What one utensil couldn’t you live without?

‘Apart from my mouth – I never shut up! – it’s probably a micro-plane grater. They never go blunt and you can grate hard cheese, soft cheese, chocolate, everything. They’re fantastic!’

‘It has to be New York. I go there every year. They get it so right. And you can eat around the world there. You don’t have to leave Manhattan. They do brilliant neighbourhood restaurants.’

‘Smoked whale. I had it on a market stall in Norway. I ate it out of curiosity and thought: ‘Well it’s dead already, but I did think: ‘what happens if this is the most amazing thing I’ve ever eaten in my life. Is it going to change the way I feel about whaling.’ But thankfully it was horrible. It tasted of burnt rubber. Yuk!’

• Marinated vegetable kebabs – really easy to make. Just mix up some chilli oil, cumin and crushed coriander seeds and coat some vegetables with it. Be adventurous with your veg. You can BBQ just about anything. See what’s seasonal in your local greengrocers.
• Roast aubergines – slice aubergines, brush with olive oil then whack them on the barbecue. Delicious.
• Veggie BBQ wraps – cook some jasmine rice, stir in a big dollop of coconut milk and chopped chilli, wrap the rice in a banana leaf and put it on the barbecue. All the flavours will seep through – it’s perfect for the summer.
• Aubergine satay skewers – cut your aubergine into cubes and season with salt and freshly ground black pepper. Make a simple satay marinade with some fresh grated coconut, chilli and some vegetable stock. Marinade the aubergine cubes in the satay dip then roast them on the barbecue.

The BBC Summer Good Food Show which runs alongside BBC Gardener’s World Live, runs from June 10-14 at the NEC Birmingham. To book tickets go online to www.bbcgoodfoodshowsummer.com or ring the ticket hotline 0844 579 3170