In a market now saturated with easy-drinking wines from all over the globe, how can the French go about making their own fabulous but sometimes rather complicated sounding regional wines more accessible to us British?

To a long term Francophile like myself, it’s not going to take much persuasion. However, FranceAgriMer is the organization responsible for such a task and they sent us a couple of rather tasty wines to celebrate the launch of a three year French Ã¢â‚¬Å“Wines with StyleÃ¢â‚¬Â campaign aiming to demonstrate the diversity and accessibility of their glorious national product.

So much has changed in regional French vineyards in recent decades and all of it represents a dramatic improvement in quality as well as value and in some cases a rather un-traditional modernisation of style.

The first of the wines we received however, is a classic of French regional production from a good value area of Southern Burgundy. 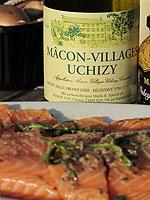 MÃƒÂ¢con-Villages Uchizy, RaphaÃƒÂ«l Sallet 2010 is a classy, unoaked 100% Chardonnay that punches way above its weight priced at only of £9.99 (Marks & Spencer).

The second, Le Cirque, Chardonnay / Gros Manseng, Gabriel Meffre 2011, exemplifies a modern, full-flavoured style of winemaking that combines grape varieties under a rather plain sounding’Vin de France’ description with spectacular results. Le Cirque is imported by Guy Anderson Wines and will become available at around the £6 mark, making it nothing short of a bargain.

Around the vineyards of France in areas such as the Languedoc, long known for mass production of everyday ‘vin de table’, wines are now produced that are as stunningly good as they are individual; in terms of quality, the best are now capable of rivalling the more famous regions such as Bordeaux.

The movement towards organic production in France is also gathering pace as individual producers take a fierce pride in every aspect of their soil, climate and vines.

Anyway, the aims of the French ‘Wines with Style’ campaign set me thinking as to how best to recommend the further exploration of French regional wines without necessarily having to take a degree in the subject, and I realised that what I have been doing all along is subconsciously measuring up new wines by getting creative in the kitchen to see how they perform. 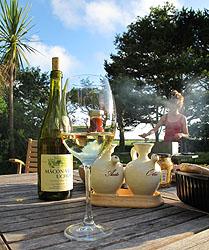 Summertime is not when you want to be slaving over recipe books; Its time to throw something together that’s easy, tasty and fun.

The MÃƒÂ¢con-Villages Uchizy is a wine that fills your palate with the flavours that have made Burgundy so famous. This is no wishy-washy standard unoaked chardonnay but a full and aromatic symphony of honeyed apricot and stewed fruits which, invigorated with ointment and spice, flows over a soft citric acidity; so refined yet so satisfying.

To accompany this lovely wine, I feel that it is best to choose more classical flavours and textures in food.

I had no difficulty in deciding on a side of salmon liberally covered in wholegrain French mustard and fresh tarragon; then cut into thick strips and grilled over charcoal, outdoors on a warm, sunny evening. The grill needs to be watched over so the surface of the salmon begins to caramelize and the mustard and herbs start to form a crust that will burst with flavour and harmonize with the wine.

The Le Cirque Chardonnay / Gros Manseng, with its impressive modern cocktail of fruit flavours, has an altogether different character.

Rich with the scent of a deep green meadow, Le Cirque delivers a satisfying and rounded medley of ripe peach and mandarin with papaya and lime which would have the ability to combine with almost any food without overpowering it.

I went in the direction of what you might call a’freestyle risotto’ and stripped a cold roast poulet into some fluffy but al dente basmati rice with an’almost shocking’ quantity of whole roasted garlic cloves.

To this I added a small handful of sliced fresh lemon fried in olive oil, a modest number of, green olives and a lot of chopped Californian prunes. This was all mixed together with a liberal sprinkling of Palestinian Za’atar herb mix while the pepper grinder worked tirelessly overhead.

The result was, I guess, somewhat Moroccan in character and the Le Cirque wine handled the herby sweetness effortlessly.

I don’t suppose life will be long enough to savour each and every one of the regional wines of France with a dish of choice; but  I’m going to give it my best shot.