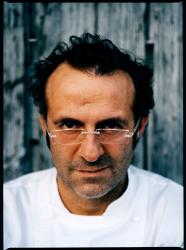 Ã¢â‚¬ËœThe Lab’, is a brand new event  by the creators of Taste of London and in partnership with AEG. Hosted by TV chef and food writer Gizzi Erskine, The Lab’s kick-off three night flavour experience will launch on 25 April 2013 at Tobacco Docks, London, with a spectacular chef line-up and DJ’s to open and close the night.

Guests will be offered an array of interactive experiences, working with some of the world’s gourmet innovators, including Brazilian top chef Alex Atala whose Sao Paulo restaurant D.O.M, is currently fourth best in the world. Massimo Bottura whose three Michelin star restaurant in Modena Italy is fifth best in the world, will be presenting at The Lab. Lars Williams (Noma’s head of research and development) will host and curate the Noma Flavour Test at The Lab, holding tutorials and masterclasses with surprise collaborations on the night

Joining the bill is Dinner by Heston Blumenthal’s Ashley Palmer-Watts, who will present alongside world renowned forager Miles Irving on the live stage, as well as pioneering drinks creator Tony Conigliaro. The AEG Experiment will showcase the creativity and thinking of many of the UK’s top chefs including Bo London’s Alvin Leung, The Kitchen Table’s James Knappett, Bruno Loubet and Duck & Waffle’s Daniel Doherty.

Other experience features include an intimate’audience with’ Research Lounge for insider info, tips and techniques from the professionals. An interactive mixology lab and pour your own beer feature will run alongside the experimental cocktail bar.The Lab will engage guests through interactive, exclusive and intimate experiences, learning about flavours and enjoying a night out, with dishes and drinks to tantalise taste buds.