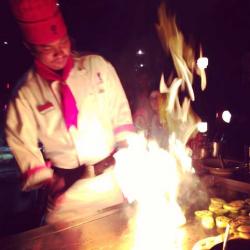 There is nothing in life quite like pantomime. A spectacle for the senses that enthrals, delights and distracts. In America, carnival attendance actually went up during the Great Depression. People would pay a high price to forget their troubles, if only for an hour.

Benihana is pure pantomime. It begins the second you walk through the door – a high energy ‘hello’ from the many members of staff who line the walls of this chic basement cavern on the King’s Road – and continues throughout the meal. The chef is the clown of this Big Top: juggling, joking, shouting and setting his hat on fire. Describing the whole act is impossible; however, it did involve a flaming onion and a handful of equally flamboyant Japanese stereotypes.

All comedies have a serious side though – probably. A moral within the laughter – perhaps. And after the Beni-Girls had finished their routine and the sake barrel had been smashed open, the mood grew sombre, even if the drink flowed faster. The reason?  Steak. Wagyu steak, to be precise. No smiles here, just a serious slab of Japan’s finest beef, wheeled in on a ceremonial trolley to herald the celebrations for Benihana’s 50 anniversary – it stopped the conversation dead. Cut rapidly and expertly, the thin cuts of steak were flash fried at the table – as most food in Benihana is – served atop rice with a delicate watercress garnish. The meat melted like butter on the tongue.

This was course one of a five, six or seven course menu. A £50 birthday gift from Benihana to their customers, pulling them through the door to partake in the festivities. Delivered as quickly as that Wagyu was cut, it’s not clear where one course finishes and one begins – there really is no time to breathe, let alone count. The first course was obvious enough: a light onion soup, with the Wagyu sitting proudly alongside.

Then came the lightning procession of prawns, cooked and chopped theatrically on the hot plate; egg fried rice, mixed before your eyes; lobster tails; tempura vegetables; sushi; and a main course of Scottish beef, black cod, and mushrooms. Seemingly never ending, my sides hurt from the mountain of food, my eyebrows singed from the fire dancing across the hotplate, but at that price, my wallet would have been barely troubled – had I been paying.

As the razzmatazz ended and the chef scrubbed the hotplate, I sipped the last of the sake and contemplated the food. While the prawns suffered from an overdose of salt and the tempura batter was overly thick and doughy, the majority of the dishes were as advertised. Big, bold chunks of meat, flavoured simply, and delivered in large quantities. 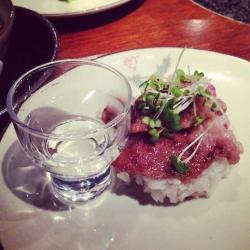 As to be expected, the Scottish beef did pale in-comparison to the Wagyu, although its tough nature and abundance of pepper are two things the chef and the restaurant could adjust in its favour. The final course, the dorayaki dessert, was really a non-event; again, that’s to be expected following the rich courses that preceded it.

Not a place for a casual diner, Benihana is far more suited to a large group in a party mood. I can see hen, office and birthday parties congaing their way down the staircase to indulge in seemingly endless drinks and be mesmerised by the chef’s finest tricks.

That said, while the celebrations continue, I could be tempted to visit with a group of any size to take advantage of that £50 menu. At that price, you’re robbing them blind!