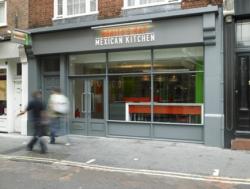 I’m a bit of a sucker for any sort of food that makes me feel American, it must be a hangover from all that US culture I absorbed when I was younger in the form of films, TV and music. Included in this food bracket is: Chinese food eaten from a Quality Street shaped cardboard box with a gaudy dragon logo on it, Oreo cookies dipped in milk, giant pretzels and a burrito wrapped in foil. My all American foodie love affair meant that when I was asked to visit the newly opened Covent Garden branch of Benito’s Hat Mexican Kitchen I was on it like Fox News on an adulterous Democrat.

We had the perfect route mapped out with military precision. Designed with the sole purpose of avoiding the fantastically frustrating living hell that is the Northern Line, the plan for ‘Operation Burrito’ as I’d code named it was to take the train to City Thameslink and bus it up The Strand.

How naive I’d been because I’d ignored the fact that getting around London is never as simple as it seems when you first dream up your odyssey from the comfort of a building. Anyway he who dares wins as they say.

For reasons I have neither the space nor the inclination to share with you we missed our bus stop and landed up on the southside of Waterloo Bridge by the Imax cinema.

Bang on cue the torrential rain began a carpet bombing campaign just as we approached the bus stop. It hadn’t rained in London for what felt like a month but clearly that’s because the clouds were saving it for this very moment when my hair was perfectly straightened and I had no umbrella. And man did it rain, Bob Dylan was right “A hard rain’s gonna fall” and fall it did.

The next bus arrived and Operation Burrito was back on track but I realised when we alighted the bus that not only did I have mere seconds before my hair errupted into a full on frizzy lion’s mane, but that wearing long hair loose for a meal that consists of nachos and burritos is a terrible idea. I panicked, running into various souvenir shops to buy a hair tie but nowhere had one. Thankfully my ellusive initiative kicked in; an elastic band, that’ll do I thought so I asked the next shopkeeper who looked at me like I’d just asked him for his right testis but begrudgingly handed me one saying half seriously “five pounds please”. It was too late though, I had what I wanted in my hand and I legged it out of there.

When we arrived at Benito’s Hat it was busy and loud and not really what I’d expected. It didn’t look like a restaurant but more like the burrito bars on Upper Street; modern, casual and bright.

We sat down and the manager brought us tortilla chips served with dips. The chips were as far away from Doritos as a tortilla chip can get with their light crunchiness and pleasing sunkissed colour. The crispy shards were flavoursome and had an authentic mealiness to them, presumably from the flour they were made with.

The guacamole was so fresh that if I didn’t know better I’d have thought they had some sort of avocado orchard round the back. It was creamy moorish goodness and went well with the fireness of the salsa verde. What I liked about this starter was that the chefs at Benito’s Hat had managed to grasp something which the makers of manufactured tortilla chips either aren’t aware of or can’t be bothered to do:

A chip is for dipping, the dip needs to stay on the chip, the chip needs to be curved in such a way so as to give the dip a space to nestle into and hang out in until both chip and dip are chucked in the gob.

The curvature on these babies meant you could get a whole lotta dip on that chip. Perfectos!

Next was the climax of the evening, time to head up to the counter to select my burrito. The way they do it for you here is like a human conveyor belt: you select your tortilla, then your meat (chicken, steak or pork) or vegetables, your fillings and sauces and finally your garnishes like some hardcore looking chillies or grated cheese. They roll it up like pros, wrap it in foil and put it on a little lime green tray and you then head back to your table to gobble it down.

I chose to have the pork burrito with ‘a little bit of everything’ and some spicy sauce. The pork was lovely and tender because it had been slow cooked with special seasoning which, without wanting to sound like a Tory MP, gave the whole burrito a street foody flavour. Just to clarify, I’ve tested both the appropriateness and veracity of this statement with several people who reassure me it is neither borderline racist or derogatory in any way despite my initial wariness of using such a generic term. Said seasoning lent the entire burrito a fragrant, light spiciness similar to the background flavours you can often taste in Middle Eastern dishes.

It really is almost impossible to get across just how good the Benito’s Hat burritos are because, they are so mindblowingly satisfying to eat and so wildly different from the insipid mess they serve up at other places like Chiquitos, that it’s like eating a different dish. However, if I had been ambushed on the way there during Operation Burrito and the captors told me that my life depended on describing the burritos in only three words I would say vibrant, hearty and succulent.

Atmosphere wise Benito’s Hat is where the party’s at cool cats, so take note! When we were there they played The Killers, MIA and The Drums which the eclectic crowd that included Hoxtonesque trendies as well as middle aged middle class city workers, seemed to love. Be warned though, head here after a night out and you’ll be dancing on the tables which I’m sure wouldn’t go down well with the employees who keep the place spotlessly clean.

Quality and fast food wise I don’t think Benito’s Hat Mexican Kitchen can be beaten; A giant burrito costs only £5.50 and if you wanted, you could order and be walking down the cobbled streets of Covent Garden with your hefty burrito in hand within 4 minutes.