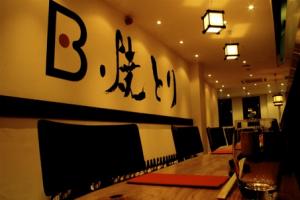 Bincho Yakitori on Old Compton Street is a modern Japanese restaurant specialising in Yakitori, surprisingly enough. In case you didn’t know, Yakitori is essentially Japanese barbecued bird. There are other dishes on the menu, a lot of other dishes in fact, but we’ll get to that later…

The concept at Bincho Yakitori is simple; put it on a stick, grill it, sauce it. The ‘sauce it’ stage involves brushing the meat with Tare right at the end of grilling so as not to overpower the flavours of the meat. Traditional grills, imported from Japan and designed to retain an intense heat, are used to cook the food and to fuel the grill Bincho-tan is used, a dense oak charcoal of almost pure carbon.

Yakitori dishes like Momo (cornfed chicken), Sunazuri (chicken gizzard) and Aigamo (duck breast, spring onion and wasabi) are daintily small and cost from £1.50 to £2.20 for a pair of skewers. The idea is to try lots of different skewers, ordering 3 or 4 dishes at a time devouring them steadily until you’re full up.

We started off with the Mune Shishito (chicken breast and shishito pepper), the duck breast and after a minor educational seminar from my friend, the chicken gizzard. This was my Yakitori cherry popping, so not knowing what to expect I was delighted with the juicy, succulent 50p sized morsels of meat- they weren’t fancy, served with an emulsion of potato or a vegetable foam, they were just good quality bits of animal flesh, cooked perfectly in the age old Japanese style and served on a skewer like the ones you get lumbered with for the entire night at parties with canapes. 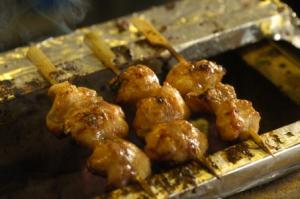 The duck had novelty value seeing as duck is rarely something us Brits whack on the barbecue; its denseness and smokey flavour well matched the fresh, clean taste of the spring onion and the spicy hit delivered by generous blobs of fluorescent wasabi. The gizzard was very basic, but then it only needed to be due to its chewy texture and similarity in flavour to really dark turkey meat. The Mune Shishsito offered a bit more variety than the other two because of the sweet, slightly charred shishito peppers squashed onto the skewer along with the chicken.

For round two we ordered one last dish from the Yakitori section of the menu, Uzura bacon (quail eggs wrapped in bacon), and the rest from the Kushiyaki section. Kushiyaki means anything but bird; meat, fish and vegetables cooked in the same fashion as the Yakitori.

Orders placed for Gyutan (beef tongue), Ginnan (Ginko nut) and Hitsugi (lamb), we delved into our sake served in a wooden box. In Japan drinking sake from a little cedar wood box is the traditional way to do it and the rumours that the sake picks up the flavour of the wood and acquires a spicier taste proved to be true.

When the food arrived I was instantly drawn to the enchanted looking small ginko nuts that reminded me of the beans from Jack and The Beanstalk. Despite being cooked on the grill they retained a wetness that left the inside moist and mealy and the outer shell slippery. Like pretty much every nut, they didn’t taste of a lot besides that sort of natural, creamy nutrient stuffed goodness that makes you go back for more and more. The beef tongue too was undeniably moreish with its sweet fatty crust and its stringy texture, whilst the lamb was devoid of the greasy fat that lamb dishes often don’t seem to be able to shake.

Other highlights from the ‘anything on a stick’ sections included Buta (pork belly) with its melt in the mouth flesh and its trademark shatteringly crisp skin and fat and the Unagi (eel), which was a million miles away from glutenous looking jellied eel.

Eating at Bincho Yakitori was an interesting experience for various reasons, namely because of the opportunity it gave to eat familiar meats cooked and served in an unfamiliar way, but also because it’s a different way to eat altogether. Ordering small dishes in round after round of stomach led fancy means that the meal can be as quick and light or as substantial and lengthy as you want it to be.