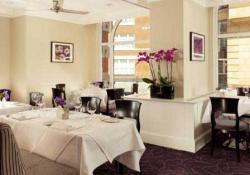 There’s a certain lack of architectural history around St James’s. What the Luftwaffe didn’t destroy with their bombs, the urban planners and architects finished off with their pens. New Scotland Yard and Westminster Council are just some of the brutally hideous buildings around, although I have to admit that it is rather fun to stand under the iconic revolving sign of the former and loudly hum the theme from The Sweeney.

Doing that almost made me late for the Opera evening at Courtyard 51 at 51 Buckingham Gate Hotel, which would have been a shame. This is a rare event the hotel puts on every now and then in order to make good use of the remarkable space they have out back.

Triangular in shape and bordered by the high backs of buildings, the courtyard is a bit of an Edwardian gem with a stone frieze running round all sides depicting scenes from Shakespeare’s more arcadian work. The bottle green wall tiling reaches up well above head height and each tile is a slightly different shade, so that as the light begins to fade and candlelight takes over, the walls shimmer rather fetchingly.

The entertainment dictates the meal and its progression. No choice and each dish served at the same time, although vegetarians do have good options. At 7p.m. the Covent Garden Strings take their seats under the balcony and the evening kicks off with some of Opera’s Greatest Hits. A few arias, a few ensemble pieces and some belters of songs all follow. It does kill table conversation a bit; the danger with opera being that just as you raise your voice to be heard the music suddenly drops to a whisper and the whole courtyard gets to hear just what you think of David Cameron.

The Covent Garden Strings are that rare thing nowadays, a musical comedy act and collective. Tonight Sid Bowfin, who is clearly channelling the spirit of Bill Hall the legendary comedy violinist, leads a crack team of four in a performance that mixes excellent fiddle playing with clever crowd control through smart ad libs and polished comedy routines.

On vocals, as we say in the music biz, are husband and wife team Jack and Imogen, delivering opera and a bit of Tommy Cooper magic from all sides of the courtyard and to great effect from the balcony over the stage. There are four separate sections to the show, punctuated by breaks for the food.

So what of the food? Well you don’t expect wonders at these sort of things any more than you do at a wedding reception. Even so the Lobster and Salmon Terrine with watercress sauce and amaranth and limoncello jelly wasn’t bad at all. It was wilting a bit in the heat but survived long enough to be enjoyable.

Mains of Djaj Bil Sanieh came straight from the outside grill – barbecued chicken breast with fried potato, green bean and tomato salad and pitta bread. There was a bit too much raw garlic in the salad, it was still keeping me company when I got home, and the pitta was a bit tough. The chicken was very good though, properly seasoned and aromatic from the grill. It would have been even nicer if they’d used breast with bone in and skin on though, a bare chicken breast is nakedly inferior.

It all tasted very fine in the outside air, a good choice of mains for the occasion. And when for a few moments some spits of rain threatened our enjoyment, the very efficient team had umbrellas over the table before you could say’rain stopped play’. In fact it didn’t, the crisis quickly passed over and the brollies were just as quickly taken away again.

Meanwhile dusk had descended and the courtyard gained an intimacy and romance that pulled the audience together and accentuated the theatre. Laughter was now breaking out non-stop and the acts were hitting their stride well.

Dessert of a pretty good Monbazillac Panna Cotta with a strawberry compotes was suitably summery and a separate extra menu of Cognac and Cigars was passed around as, being in the open air, smoking is permitted. There is a rare luxury to be had sitting, sated, watching acts in the open air with a brandy glass in one hand and a fine cigar in the other.

You have to hand it to the hotel for thinking out of the box and offering something a bit different. All the tables were full and there was a great atmosphere and sense of shared fun by everyone. The food was well up to snuff and the entertainment slick and professional.