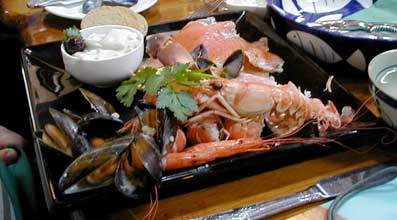 This is partly a restaurant review and partly a piece on produce, because isn’t what makes a restaurant truly great the quality of what it puts into its dishes just as much as how it cooks them? Fins is in a very fortunate position because it cooks what it catches and has become an official Gary Rhodes Local Food Hero.

Fins is part of Fencebay, a pretty and small smokehouse in Fairlie in beautiful Ayrshire, Scotland. Not only do they smoke fish for sale and for the restaurant, they catch most of it themselves too from their small boat Pegasus. Using sustainable methods of fishing, Bernard Thain who owns Fencebay with his wife Jill, brings in all kinds of fish and shellfish including the rather unique Squat Lobster a fantastic creature that’s like a 4WD version of a crayfish.

The restaurant, a clean and simple room across the courtyard from the smokehouse is busy even on a Sunday lunchtime with people clearly prepared to drive out from as far as Glasgow to get a proper seafood meal. There is hot or cold smoked salmon, hot or cold refers to the method of smoking, and not the temperature of the dish, which is smoked over beech wood because, as Bernard tells me, they have a lot of beech in the immediate area so why use expensive oak that has to be transported? The beech also adds its own unique sweet flavour too, less powerful than oak, and which is perfect for the firm fleshed salmon. As for the Cumbrae oysters, shallower and smaller than the ones we see in restaurants here and in France, they are quivering fresh and swimming in beautiful brine. They are too good to simply slip down your neck; they need two or three sharp bites to fully savour them and just a dash of lemon juice to pique the flavour.

The hot seafood platter, which needs two strong hands, to lift, is something you’d be happy to have in La Rochelle basking in the hot sun. To have it here as light snow begins to fall outside is a sharper pleasure. Steaming hot mussels, crab claws, salmon fillets, pink prawns and the squat lobster are just some of the things I can see people tucking into but it varies with the season so that langoustine, scallops and mackerel could equally turn up in your catch. It all shimmers with sea freshness, ready to jump off the plate.

I try a pepper crusted salmon fillet with whisky sauce, as we are after all in Scotland, and it’s so simple and honest it makes you wonder what we see in Fat Duck food and its chemistry set cooking. Here close to the water it came from, the fillet is brimming with taste and the whisky sauce is a rare guilty treat from the old, heavier, cooking of the past. Here it never went away and it still stands up against what is so often simply novelty for the sake of it. With it come potatoes boiled in their skins and running with butter and what else could you ask for? Perfect

There’s a lot on the menu and on the day’s specials blackboard that I’d cheerfully come back for and Prestwick airport and its cheap flights is near enough to make it affordable and, guess what, there’s even a holiday cottage to rent. A quick turn around the Fencebay shop to load up on some of their produce and then back to London? Now that’s a weekend foode break and no mistake.