The D & D restaurants are all a bit different in style, but all seem to aim at being somewhere to rely on, whether it’s towards the high end at Cog d’Argent or a little bit touristy like the Butlers Wharf Chop House.  Fish Market seems to be swimming right in the middle. 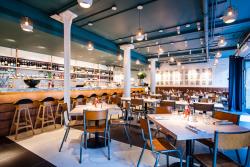 Occupying a part of the last of Devonshire Square’s ancient spice and storage warehouses to be converted, Fish Market is one of the more recent additions to the D & D portfolio of restaurants. There are at least twenty five of these in London, which must make them one of the most successful groups around, that is if you don’t count all the burger bandwagons.

It’s nicely placed to catch people passing down the lane to Devonshire Square’s main entrance and offers a menu that navigates unsurprisingly toward the fish side. But if you wanted a steak you wouldn’t have sat down in the first place.

Some rather steep stairs; there is a lift for the differently abled, lead from the patio to the main room which is decked out in a way that may resemble a trawler’s dining room, if I knew what one looked like. It’s certainly semi-industrial, as befits an old warehouse, and thankfully does not have any nets on the wall containing badly painted wooden fish or glass floats.

We decided to sit on the terrace though. D&D have covered this in large umbrellas, figuring not unreasonably that rain is never far away. This is fine but the clouds have gathered a bit and together with the black umbrellas have drained so much light from the area that I can’t even see J across the table, let alone the menu. The clouds soon move on though and it becomes visible.

There’s rather a lot to choose from and to make matters more difficult, there’s a specials board too. The latter is a good idea as fish availability can change so rapidly, but even so it’s from the main menu that we decide to eat with its range from fish finger sandwiches to a big old seafood (s) platter.

Salt and pepper squid, roast garlic and chilli catches my eye. It’s a dish I love, and while I know it won’t be as good as you get in Vietnamese restaurants, I want it still. As it turns out, and turns up, this isn’t a bad stab at all with the squid crispy and a decent mayonnaise to dunk it in. The bit that fails is the chili, instead of being fresh it’s semi dried and gets caught in the teeth. It doesn’t deliver the crunch and burn it should.

J has the Kedgeree Scotch egg, toasted almond and rocket salad which he reckons is fine, the egg golden and not grey and the fish assertive but not looking for a fight. It’s a good dish for this kind of place, reasonably filling, reasonably just behind the trend and reasonably priced. 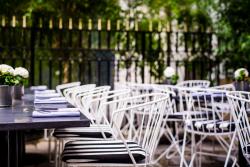 We’re trying hard to not have battered cod and chips for mains, as it seems everyone else already is, but it looks so good resistance is getting a bit futile. Ever mindful of my svelte figure I do something odd and order steamed haddock. Now steamed fish is something that forever cries out’hospital food’ to me, but the mention of a poached egg on top drugs me into ordering it.

It’s much better than expected; the very fresh fillet has been curled onto its side to give it more plate appeal and the steaming has plumped it like a hospital pillow. When the perfectly cooked egg breaks over it there are good mouthfuls to be had with silky, subtle chives in a cream lapping at the base. I actually feel pretty virtuous eating it, not a feeling one normally gets in a restaurant.

J has also beaten the battered cod craving but has cheated by going for roast cod instead. It’s a mighty hunk of fish with the skin fried before it went into the oven so it has a good golden glow and crispness. Pea puree has been’skidded’ onto  the plate, which makes it look as if the fish only narrowly avoided shooting off the far side, but pea and cod go together well that this slightly retro presented dish is no car crash.

New potatoes for J and chips for me, the latter to undo any good work that eating healthily steamed fish has done. Not bad chips either, not as crispy as they could be despite being fashionably thrice cooked, but very edible nonetheless. When did chip shops ever serve crisp chips anyway?

And so to pud, but in fact we didn’t have any. Sometimes even we feel a little full. Verdict? No nonsense, sound cooking and well-priced especially the set menu. It feels a bit like a chain place and it isn’t fine dining, but it’s still smart and relaxed. It’s busy and certainly suits local office workers and those on lower budgets who don’t want to go somewhere where they have to eat artery-busting blogfood. Overall Fish Market maintains D&D’s rep for getting it right and being reliable and I make it my catch of the week.