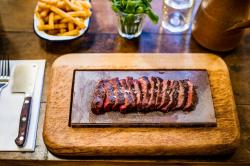 It’s a distress purchase in a country pub, because whatever else’chef’ may foul up from the freezer you can be fairly confident that he can cook a steak, or its minced equivalent the burger, adequately well.

What I’d like to rediscover, like lost innocence, is the steak restaurant of my youth, the Tavern in the Town in Croydon. My 11 year old self loved it in there – the faux Tudor decor, the big steaks with the cross-hatch grill marks, the lavish chips, the frozen peas, the tinned slippery mushrooms and the great big grilled tomato. Oh you may curl your lip in disdain, but it was just great.

Which brings us to Flatiron, Soho where a steak is £10 with salad, if you can call a glass of mache a salad, and they do. It comes ready sliced on a board, thus negating the need for the very stealable mini cleaver provided as a knife, and flatiron is a New Yawk cut of meat not all that well known in the UK although apparently called a Butler’s Steak over here.

Cut from the shoulder it’s a bit tougher than your average steak and so Flatiron sous vide it.  Now sous vide is a tricky thing, it’s very useful in professional kitchens as a means of prepping food in advance, but the resulting meat desperately needs to be finished over or under a flame, otherwise it comes out with both the texture and allure of baby food. 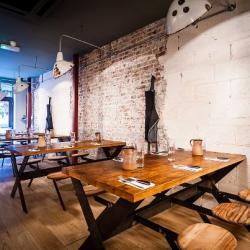 I like to wrestle with a steak, shirts off like William Shatner in Star Trek, the hard-won bits are where the flavour is and that’s why onglet is so good. Flatiron’s steak is butter smooth, you could cut it with an airline spork, but they do a pretty good job of getting some texture and caramelisation on the outside, so saving it from being anodyne but it needs a bit more. Of course getting in a Josper or a charcoal grill would be expensive, but a hotter pan would probably do just as well.

The chips are rather good, the tasty crispy bits lurking at the bottom of the tin dog bowl they’re served in indicative of the real deal. The market greens of savoy cabbage steamed and served in another tin bowl are not so good, it’s school dinner cabbage even though it’s not been boiled to death in the approved manner. The steak sauces meanwhile are serviceable.

Seating is at funky tables with fixed wooden disks for seats that you swing your leg over as if mounting a culinary motorbike. There are no single tables only group ones, but then you’d hardly be coming here for a romantic meal now would you? Yes? Well, good luck with that.  Wines come in specimen flasks of various sizes, which is handy, and they’re good enough for steak having a bit of body and swiggability.

The decor, menu fonts and other style elements borrow magpie-like from the scenester mono glottal restaurants – your Polpos, your Meatliquors, your Pitt Cues etc that have done so much to dreary up London – but pinching other people’s proven ideas isn’t such a bad idea if you’re looking to steer a safe course.

Whether it is a safe course overall is debatable. Nothing wrong with the food at the price, but the same people who’bloody loved’ this kind of thing mid 2012 are now turning their butterfly minds to the next fashionable thought. But for non scenesters who just want to eat in a’clean, well-lighted place’ and not make a style statement, tweet  or take photos of their food then Flatiron has only a few wrinkles.