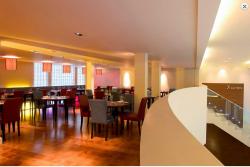 If you seriously can’t find anywhere to eat in Shepherd’s Bush then chances are you’re extremely fussy . Come on, Westfield’s right next door to the station and it’s got more chains than Mr T. Though if you do happen to be fed up of the big corporate approach to your dining experience, there is a little hotel nearby that has media-types, the odd celebrity and a comfy restaurant.

Kanteen is housed inside the K West Hotel & Spa, part of the same group that owns The Landmark. That’s not strictly speaking a vital piece of information but it does seem to quell any doubts of my more pretentious mates. The hotel itself apparently has spa facilities, but I haven’t tried them, so let’s just stick to the food.

The restaurant is on the first floor of the hotel. There’s a handy little staircase next to the bar in the main lobby of the hotel. It’s worth trying a cocktail or two at the lobby bar and being slightly weirded out by all the people walking around reception in bathrobes. Initially a bit strange, but that perception gradually turns into appreciation as you realise you’re in a really laid-back and care-free environment.

It’s not a boring bland design but the simple interior is actually a pretty nice change from being drowned in wacky concepts or uber-luxurious splendiferous extravagance. There’s enough space between tables for a petrol-head to claim they could parallel park in and the lighting is a few flames above candle-light. We’ve even got a chirpy waiter so everything’s pretty good as far as the lead up to eating goes.

There was nothing wrong with the flavours in my starter of homemade spinach, ricotta and sundried tomato pesto ravioli, but the proportion of pasta to filling baffled me. Soft creamy ricotta and spinach works and the added acidic tang of sundried tomato pesto cutting through is great, but this offering looked like lasagne sheets with a little bulge in the middle, and that’s not my cup of tea. I left the excess pasta and started to pick at K’s smoked paprika squid, chorizo and sweet chilli aioli Ã¢â‚¬â€œ I’ll definitely have that next time, really thick-cut chorizo chunks. Great.

There’s only so many times you can describe steak and chips. What we really want to know is does the restaurant serve up a good one? Yeah, it does. They got the right amount of pink that I wanted, the hand-cut chips are crisp but still fluffy enough to soak up the meat juices and the sweet potato version of chips have a real crunchy exterior. Parmesan & rocket side salad makes a good accompaniment and I’m chuffed to have had a really good, down to earth, traditional main course. Nice one.

Sticky toffee pudding and vanilla ice cream is always going to be a winner, it’s harder to get it wrong than right. Hot, soft, sweet and thick Ã¢â‚¬â€œ sounds like it could be from Essex. Plus we were presented with a sweet wine to top off some excellent liquid recommendations from our chirpy waiter. No complaints on dessert, in fact, no complaints with the restaurant.

I realise it doesn’t sound like a ground-breaking menu and the hardcore Come Dine With Me lovers will scoff and demand much more flamboyance, but that’s not the point of coming to Kanteen. If you want something bland from a brand and covet sitting in a huge fishbowl so everyone can see you eat, go to Westfield. If you’d like a more intimate, quiet option with more character and personality, Kanteen is less than a five minute walk away and you’ll get the attention and dedication from the kitchen, the bar staff and the waiting staff to make your meal way more value for money. Sometimes it’s better to be refined and unwind.