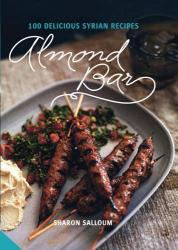 Syria gets itself in the news for all the wrong reasons right now, but let’s stop and consider something cheerful for once, the food.

The Almond Bar is a restaurant in Sydney, Australia and Salloum is co-owner and chef. Brought up in a Syrian household she was inducted early into the habit of hospitality based around food and drink, and this book has over 100 recipes to share with friends and family.

Middle Eastern food is still largely the choice of Middle Eastern people in the UK, and not many others, although Tony Kittous with his Comptoir Lebanese restaurants is certainly bringing this brilliant cuisine to a more mainstream audience. This book should help enormously in that crusade.

Syrians believe you should never eat alone and there is, Salloum says, good natured rivalry between household chefs to put on a great show. It’s from those women; the kitchen was almost entirely a female domain in her youth, that she learnt her skills and recipes.

She is however as she says,’the next generation’ of Middle Eastern cooks’ and this is a cookbook for all. Kicking off with a quick, and really rather necessary, glossary of Middle Eastern foodstuffs, as well as a list of suppliers here and around the world, she soon gets down to business.

First the spice blends, make them yourself or find in the shops, then sauces and dips. Smoked aubergine dip, with its aromas and citrus tang of sumac and a chargrilled pepper walnut and pomegranate dip both beg to be scooped up with flat breads. Labne, the yoghurt based dip and accompaniment found everywhere, is so simple to make at home. Date and avocado dip with tahini sounds heavenly.

There are dishes that are quite classy, such as scallops drizzled with pomegranate butter, or Za’atar prawns with pumpkin mash, and there are the classic falafels, staple of many a street food traders menu but rarely made as well as suggested here when even the dried chick peas must be of the very best.

A seafood broth spiced up with sujuk, a kind of sausage, looks deeply edible. Each recipe is off the page gorgeous, the layered chicken with flat bread, rice and tahini yoghurt sauce. Or sour cherry kebab balls. Or upside down lamb and rice.

And of course desserts, rosewater ice cream or semolina shortbread; a turmeric cake which sounds intriguing and not hard to make and semolina fudge.

If you’re bored by the ordinary and keen to explore a cuisine that is still off piste for most TV chefs, then Almond Bar is going to get you restocking the cupboard and excited all over again.