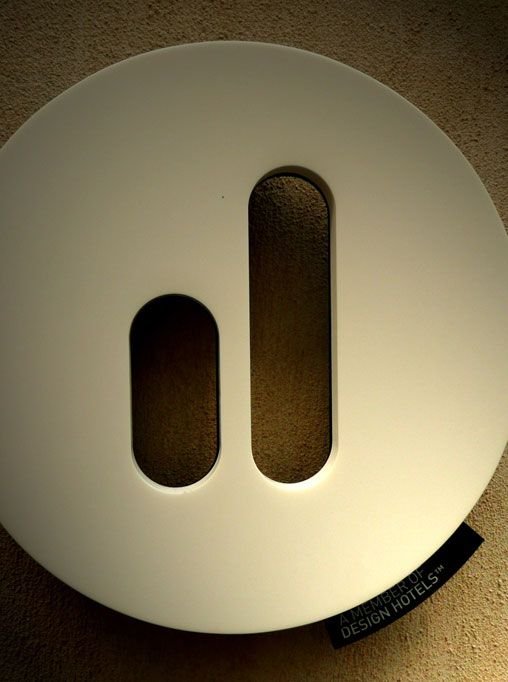 ‘Am early – sipping bitter French 75,’ read my friend’s text message. I salivated. Having been trapped on a hot train, I mouthed ‘cocktail” before ‘hello” when I finally arrived.

Past 3D cameras and an increasingly famous commissionaire, ‘No. 20’ is the restaurant at Soho’s ‘Sanctum’ Hotel. This is London’s answer to Paris’ boutique ‘den of opulence’, the Hôtel Costes. Chic and shiny, dining room details include crocodile-skin chairs (not crocodilette), taut, bronzed banquettes, glass sheathed pillars and positive photo panels by the MOD’s official artist, Xavier Pick. Rather apt for a building once occupied by MI6.

Visible in the open kitchen, Gavin Austen cooks classic British. Served in a scalding tin, an odd number of sweet rolls provoked a fight for the third – brawl for brioche. Starters were precise. In answer to my diva-like request, fresh pea and mint soup was served ice-cube cold. My friend’s crunchy nest of quinoa, pomegranate and grapefruit was bound by avocado slithers on lily pads of spinach. Tidy, tasty and healthy.

I had veal stew for the main act – the RSPCA approved rosé version. Ethics aside, my palate tells me that this isn’t the veal-deal compared to the white. Lacking its succulence, a peppery, gooey gravy at least went some way towards moistening the meat. Baby carrots carried a nervy, vinegar tang – but I’m not sure why. My friend chose the odd dish out. Wagyu burger (confusingly pronounced ‘veggie” by the waiter) is fast becoming Austen’s signature dish. The tenderly cooked patty jutted beyond the clamp of sesame-studded brioche. This amusingly induced an illusion of two giant Portobello mushrooms. Without wishing to cast aspersion, pencil thin fries were as addictive as Ronald McDonald’s.

Despite resting at the end of a brushed chocolate skid-mark, a shared dessert of upside down banana cake was tackily caramelised, with an aftertaste reminiscent of banana ‘Nesquik’. Infantilising comfort food. 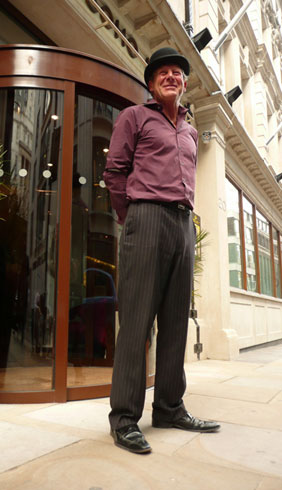 With shades of Anthony Worrall Thomspon’s original trendsetter, ‘Ménage à Trois’, going on the precision of the starters, and the pudding’s opulence, we could gladly have enjoyed an unconventional two course meal.

From a short but playful wine list, I noticed that Champagnes ‘Cristal’ and ‘Armand de Brignac’ are equally priced. After alleging that Cristal’s Chief Exec made racist comments about his support, hip-hopping businessman ‘Jay-Z’ famously deserted the brand for the gold-plated Brignac. I worked their U.K. launch last year, pouring him a sleek Super-Tuscan rather than fizz – a puzzling endorsement? There are also two English wines. I doubt I would find ‘Chapel Down’s Nectar’ aboard Jay-Z’s rider, though.

After lunch, we begged a tour. Despite Grade II listing, the design is ambitious. There is a cinema downstairs and classy loos with black ceramics. Upstairs, 30 sound-proofed bedrooms with plenty of gadgets are accessed by tasselled keys and Swarovski handles. These range from rent by the hour wardrobeless ‘crash-pads’, to suites with bars and circular beds.

In trying to cultivate a naughty celebrity clientele, Sanctum’s room service carte goes beyond arranging an extra pillow. Not only are guitar amps available, but for no extra charge, a ‘spiritual adviser’ can be summoned 24 hours to merge a martini.

In view of envious office workers, the top floor terrace is a suntrap with a Jacuzzi, bar and game cube table. We rounded our afternoon off with a tall, slow-sipping mango, orange and lemon grass cocktail. Curiously, a film about nuns unravelled on a plasma nearby, fitting I imagine, for a hotel named in honour of the Catholic Church’s sanctuary next-door.

Regardless of religion, if Sanctum is serious about seeking hell-raising A-Listers rather than the more tender Joss Stone (the most notable check-in so far) then I suggest that this Design Hotel member needs to play a little harder to get. At the moment, short of providing TV sets on bungee cords, they pander so pleadingly that I wonder what would actually happen if J-Lo, Li-Lo and Doherty stopped-by and made themselves at home…