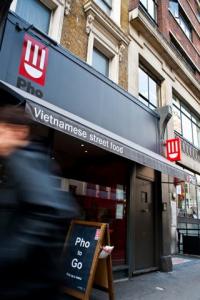 Everyone loves a Saturday. I’d eagerly anticipated this particular one. Tickets to UFC 120 with old school mates, Villa play Chelsea live on tv and I get to review Pho in Soho with The Crazy Greek. Of course watching the footie and eight UFC fights with your mates is going to result in a lot of brewskis. Thank God I’m going to Pho before hand, I’m going to need a good lunch to stock up for the evening.

I’ve been keen to review Pho for a while, having endured a frantic September filled with meetings, weddings, stag parties and business trips. Damn you September, after school and university I thought I was rid of you, but alas you managed to creep back into my bad books this year. Git. But I’m back, so, for food and fight fans around the world, in the immortal words of Big John McArthy, ‘Are you ready? Are YOU ready? LET’S GET IT ON!”

We arrived for a 12:30 lunch at Pho, which apparently is a ‘crazily early’ time for a lunch according to The Crazy Greek, but then she comes from a place where they eat breakfast at midnight and spend the rest of the time gossiping, sunbathing and rioting. Pho is rather busy when we enter but we’re greeted within seconds by the friendly staff. The décor is charming with old brickwork walls, cosy lighting and oriental smells gushing out of the kitchen.

We’re taken to a comfortable window table and presented with disappointingly creased paper menus with food splatters. A minor point, lets concentrate on the food instead. The manager introduces himself, talks us through the different dishes and makes a couple of recommendations. We agree to share starters, choosing one and taking guidance from the manager and the PR.

The Crazy Greek chooses Goi Cuon Ga (chicken and fresh herb rolls) that’s accompanied by two sauces, a peanut sauce and nuoc cham (a clean spicy sauce). The dish is a hit, beautifully presented, soft and bursting with fresh crisp herbs. The peanut sauce has a plum base to it that compliments the roll but the nuoc cham is just as pleasing.

Our other starters include Nem Nuong, (pork and lemongrass meatballs), that are to be wrapped in lettuce leaves and then dipped, though it’s a bit of a fiddle, but the best dishes are the worst presented. Both are recommendations that we’ve looked forward to trying. Goi Xoai, (mango salad), is citrusy, with a low heat of ginger, crunchy and tangy. It’s the perfect companion to the best of the starters, Rau Muong Xao Lai, (stir fried morning glory), recommended by the manager. A wonderful healthy, crunchy and salty water spinach.

If you go to Pho then you’ve got to have a Pho Noodle Soup, it’s the masterpiece on offer. I like my food spicy so I opt for the Bun Bo Hue, (hot and spicy beef brisket with shrimp and chilli paste), which has an added secret bonus, the offering of a bib. Yep, I wore one, but that’s just to protect the clothes and preserve the incredible image of hot alpha male that I was displaying on the day. The Crazy Greek’s choice is the opposite end of the scoville scale and has a tame Pho Tai (thin sliced steak). The broth is tasty on its own, but the magic of Pho is the accompanying side plate of chilli, lime and fresh herbs allowing you to find your own preference in terms of taste and heat.

The soft meat and noodles have almost filled me up, so we share a quick dessert of honey and ginger ice cream before heading out fully satisfied and The Crazy Greek informing the manager she will soon be a regular at the restaurant.

Pho opened its Soho branch around eight weeks ago. The Wardour Street restaurant is a relatively new addition to the growing Vietnamese Street Food chain. Pho now boasts a collection of five locations since its first restaurant in Clerkenwell opened in June 2005.

This was my first visit to the Soho branch but my second trip to Pho. In my pre-Foodepedia days I’d bought a celebratory dinner for my brother, sister-in-law and her niece in Clerkenwell. Pho is a notable favourite of theirs, not because of the close proximity to their home, but rather for the tasty cuisine. It’s ideal for a quick meal and an escape from the zombie filled Oxford Street.