As much as it pains me to admit it, the English don’t have a particularly good reputation when it comes to cuisine; In fact, the very phrase, ‘English Cuisine’ feels wrong, almost like a grammatical error or the sight of a pig eating a ham sandwich.

It pains me even more to admit that this reputation is not wholly undeserved – when a German friend at university asks you what traditional English dishes there are and the only things you can think of are Fish and Chips and Roast Beef (which isn’t uniquely English anyway) you can’t remain in denial about your country’s culinary ineptitude much longer.

This is why places like Putney Pies fill me with hope for our country’s gastronomic redemption. For one, Putney Pies is a world away from the stereotypical image of the pie shop: Unlike the reheated monstrosities that lie dejectedly in glass cabinets for years on end, Putney pies are cooked to order, made from locally sourced ingredients and served with traditional English chutney.

Indeed, when I told her I was reviewing the place and sent her a link to the menu, my girlfriend – whose disdain for English food I took to be limitless – actually admitted to being a bit jealous.

Upon arrival, me and my companion J, who I have lured here with the promise of a cheeseboard, are seated in a booth. Looking around at the glass ceilinged room, I can imigine that this would be a fantastic place to come during the day, particularly for lunch or breakfast: A glance at the separate brunch menu strenghtens this conviction.

A waiter glides over and and we order. For starters, I go for the En Croute Onion Soup with Old Crafty Hen and J for the selection of mini pies. Me and J’s drinks, a bottle of Greene IPA and a bottle of Old Speckeled Hen respectivley, arrive almost instantaneously.

Looking around, Putney Pies strikes me as the kind of place I can picture James May frequenting: I can imagine him feeling at home in its airy, urbane main dining room, being impressed with the vast selection of real ales on offer, and, though it goes without sayiing, I can imagine him wolfing down the pies. (In fact, James, if you’re reading this – which, let’s face it, you’re not- go and give it a try).

The arrival of our starters nudges out me of my Top Gear presenter based reverie and back into reality. For a few seconds I am convinced Putney Pies have misheard my order – they’ve given me a pie. Quietly amused by my evident confusion, our waiter explains: ‘don’t’ worry, that is your onion soup sir, it’s under the pastry lid’. Though I initially resent the effort required to break into my soup, the crumbled pastry, saturated with onion soup, is a nice alternative to bread. J’s mini pies, which I try despire his ardent protests, are also exellent and possibly a more interesting starter than the soup.

Our mains then arrive. I have gone for a Venison and Strong Suffock Ale Pie with mash, and J for today’s special, a Steak and Kidney Pie served with a side of coleslaw. 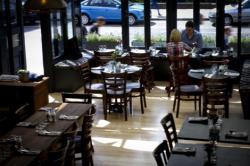 As tasty as my pie is, in combination the mash and thick red gravy – which very good – and my unexpectedly substancial starter,I can feel the amount of food beginning to take its toll. A glance a J reveals that I’m not the only one flagging.

Having made what we consider to be a sufficently valliant effort, we throw in the towl and ward off the waiter for ten minutes or so whilst we attempt to make room for pudding (a word infinitely truer to the spirit of Putney Pies than ‘dessert’).

Given the amount of – albeit excellent – pie I have forced J to ingest, he seems less exited by the prospect of a cheeseplate than he was half an hour or so ago. Despite this, he obiges and, when it arrives, digs in with renewed gusto. The sight of my cheesecake also manges to shatter my conviction that I can’t eat another bite – just as well as it’s absolutley delicious.

My only criticism of Putney Pies is that they don’t have a room out the back filled with beds where you can take an hour or so to sleep off all the caloires and ale. As me and J stagger contentedly, but incredibly sleepily towards the tube, the lack of such a facility is sorely felt.

Otherwise though, it’s hard to think of a better ambassador for English food than Putney Pies.