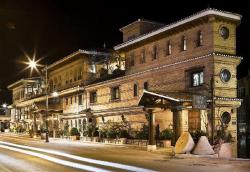 The town of Cenes de la Vega is a twenty minute bus ride from Granada city centre; like most towns in Spain it has an old church and archaeological remains of a’Moorish origin’, but in truth Cenes de la Vega is fairly unremarkable. This is what I’m thinking when I get off the bus and trudge down the town’s main road in search of the Ruta del Veleta; there’s a handful of hotels and restaurants, none of them particularly vibrant, and I fear I may be in for yet more disappointment.

It’s day four of my culinary adventures in Spain and things aren’t going to plan. The guide books say that you can eat for free in Granada where the tradition of gratis tapas with every drink is a daily reality; this is a pretty large carrot for the gourmet tourist, but beware the fat maggot that’s riddled your carrot with holes. The recession has hit Granada hard, and with the Euro and the pound almost level pegging it’s a case of less for more, with the’free’ tapas ranging from a plate of last year’s gnarly old olives to a splodge of coleslaw garnished with a single crisp, most of it viciously salted to keep you buying more drinks.

The Ruta, when I find it, is a large palazzo style rebuild with a few sophisticated people fluttering about outside. I have sweat patches blossoming at the armpits of my t-shirt and my companion is wearing hiking boots – I hope this will pass for rock ‘n roll nonchalance because I’m hungry. We’re met inside by a manager-come-butler who’s been entrusted to show us round; part museum, part living monument to the Pedraza family’s unique design ethic, the Ruta feels a little like stepping onto the set of a Mediterranean soap opera. 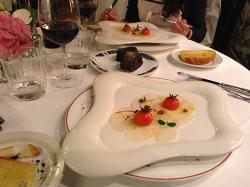 From chintzy farmhouse kitchen to an ambassador’s suite via a piano bar, chapel, and vaulted wine cellar Ã¢â‚¬â€œ the Ruta is a Versailles among restaurants, and while any restaurant attempting to recreate baroque splendour is going to encounter giddy moments of kitsch, I find myself rather admiring f the single-minded conviction that’s made the Ruta a reality.

Settled in the’farmhouse kitchen’ we’re brought the first of several dishes intended to represent the Ruta’s food philosophy:  Carpaccio of king prawn dressed at the table with warm garlic-infused olive oil is quite an elusive dish, not least because Carpaccio of prawn is difficult to eat with a knife and fork, but also because the levels of refinement involved in slicing an ingredient to the thinness of blotting paper also subdues the flavour to the gentlest of whispers, as if I haven’t so much eaten a prawn as brushed past one. I abandon my knife and fork and scoop it up with the black squid-ink bread served on the side.

Tiny sweet tomatoes stuffed with mackerel and served with scallop and sea urchin makes more of a statement. The mackerel has been emulsified like a classic brandade, its creamy richness tempered by the acidity of the tomatoes and the salty, savoury nuggets of urchin, rich with that iodine umami. Dressed with a mild and fruity Arbequina olive oil and smoked salt it’s an impressively rounded palate of flavours, as well as a being rather beautiful. 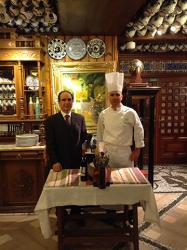 On the wall behind my head there are pictures of various notables dining at the Ruta, these include the present king and queen of Spain, and inevitably, Spanish footballers. With such impressive credentials to maintain the Ruta isn’t adverse to a little table theatre, and for the next dish the kitchen sends out a green glass bottle seeping wood-fragranced smoke. The bottle is set down lengthways and the upper half removed to reveal neat rounds of roasted octopus on a little creamed potato with red pepper oil. I’ve recently had a couple of sickening experiences with octopus where the tough outer membrane wasn’t handled properly, regrettably forcing me to contend with chewy suckers. This octopus has been rendered so soft and smoky-sweet from its roasting that you hardly need teeth to eat it.

An artichoke heart arrives with a sticky filling of rich and fibrous meat that turns out to be oxtail braised in its own juices; the dish uses no alcohol and few herbs, letting the natural sugars in the two main ingredients act as the seasoning Ã¢â‚¬â€œ this achieves an incredible purity of flavour, the meat juices flavouring the artichoke and vice versa. With this dish and the previous seafood we’re drinking a versatile and well-structured Legon Roble Tempranillo with layers of dark berry fruit, spice and a little vanilla from the Ribera del Duero region.

Dessert is an apple-caramel flavoured crÃƒÂ¨me brulee with popping candy, rice-pudding ice cream and chocolate lollypops. This is less sickly than it sounds with the apple custard managing to be both rich and refreshing from a layer of stewed apple; the rice-pudding ice-cream made with a fruit & spice infused milk is light and interesting, bearing a close relationship to Indian Kulfi. Despite the petite dishes I find that I’ve reclined so much in my chair that it’s quite difficult to sit up again. No more, I decide. Then I nibble on a chocolate lollypop.

My faith in Spanish cuisine has been somewhat revived by the Ruta. Behind the elaborate artistry there’s a pure food ethic at work that puts me in mind of an interview I once read with Spanish super-chef Ferran Adria; described as Ã¢â‚¬Å“the most imaginative generator of haute cuisine on the planet,Ã¢â‚¬Â Adria promptly instructed his interviewer to suck on a prawn head: Ã¢â‚¬Å“Ninety-nine percent of the people won’t eat the head. It’s not permitted in high cuisine. (He took another prawn in his hand, pulled off the head, and crushed it; this time the caramel-coloured liquid pooled on the plate before him.) But if I pour this over food in my kitchen, I’ve changed the context. I can do this and people will eat it.Ã¢â‚¬Â(Michael Paterniti, Esquire, July 2001). 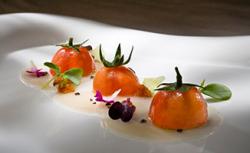 My point being; what at first might seem pretentious can have a simpler context at heart. Original and slightly eccentric the Ruta is about creating a sense of excitement and occasion, as well as faithfully celebrating regional Spanish ingredients, from octopus to oxtail, with proud and careful preparation.