A few weeks back we took a test of the Phillips Airfryer, a device that promised us great chips without the fat and fuss. We were sceptical, all good things come at a price and chips are no exception.

As it turned out whilst the Airfryer didn’t produce chips as good as deep frying, and no one seriously thought it ever would, it did make a pretty good job of it and the versatility, speed and no mess features certainly made up for any shortcomings.

Well the good people at Tefal heard about all this and thought, ‘We can do better than that,’ and soon they were sending us over their Actifry machine, telling us that this would whoop the Airfryer’s ass in a chip-off. Well they didn’t actually use those words of course, but that’s what they meant. So we had a look.

Stand by to fry 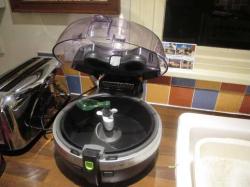 First up, the packaging. Actifry lost PC points by being packed in nasty white Styrofoam and not the nice bio-degradable cardboard of the Airfryer. Mind you, there was a lot less packaging with the Actifry, with the Airfryer we couldn’t get out the room for all the bits of stuff blocking our exit.

The Actifryer has what IT people call a large footprint; it takes up space on the worktop because it’s rather wide. The Airfryer was also large, but it was tall large, not wide large. We hope this isn’t getting too technical for you? The Actifryer looks a bit like a 60’s idea of a spaceship; the Airfryer looked like Darth Vader’s helmet. On looks and size, the Airfryer comes out ahead.

Just as the Airfryer was basically a small, advanced turbo fan oven, so the Actifry is basically a frying pan with a motorised paddle/stirrer. Of course like the Airfryer it’s not quite as simple as that, many many hours have been spent perfecting the shape of the paddle and the optimum speed it should turn at.

What they also have in common is that you use a scant spoonful of oil. The Actifry comes with its own little measuring spoon that stores inside so you ‘can’t’ lose it. Cut your chips evenly and quite slim, wash and dry well to lessen the starch, and scatter in the pan. Drizzle over the tiny bit of oil, lid down and off you go. 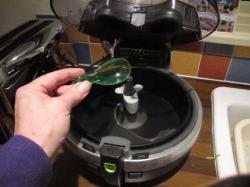 And around we go

The lid is transparent, so you can hypnotise yourself watching the action. It’s very like the old Penny Falls machines that you used to find in seaside Amusement Arcades. All pleasantly mesmerising but don’t fall into a trance and touch the lid as it gets very hot indeed. There is a timer and chips take 35 mins, almost twice as long as the Airfryer, but you don’t have to keep shaking the pan and you can at least watch progress.They’re good though, crispy and fluffy and with a nice colour. Easy to get out too as the pan has a foldaway handle to make lifting it out simple. They go soft quite quickly, presumably because the frying is only skin deep, but that needn’t be a problem. Overall, better chips than the Airfryer but at a time cost. 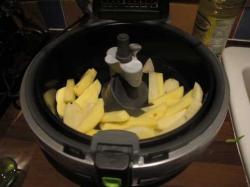 Essentially the Actifry saves you the job of standing at the stove stirring and whilst that takes the fun out of cooking, some evenings a helping hand is very welcome. We tried Mushroom Tarragon Chicken – the seasoned chicken pieces were Actifried for three minutes, then sliced onions were added along with mushrooms and then seven minutes later stock, cornflour and cream for two minutes before adding the tarragon and serving. It was really rather good, the chicken evenly browned and sealed and the sauce a smooth consistency.

We also tried placing sliced apples in the machine and they came out golden and soft ready to be dusted with cinnamon infused sugar. Aubergines with feta and cumin was another winner. Nothing you couldn’t make in a pan yourself, but it was good to wander off and get on with something else while it cooked.

And so, the end is near

Verdict? Like the Airfryer before it, the Actifry needs practice to get the best out of it but it works very well. It produces meals with far less fat than ordinary frying and is remarkably versatile. One caveat though is that when the timer gets down to 00 the heat is not turned off, so if you don’t hear the ‘ping’ you could come back to burnt offerings.

It is £138 (approx) which is very expensive for what you seem to get. No doubt the price reflects the development costs, as it doesn’t reflect the build quality which seems somewhat slight at best. The Phillips costs a bit more but has a reassuring ruggedness to it.

We liked the Phillip’s speed, build, looks and the way it could double as semi-oven so saving on energy. We liked the Actifry’s chips and the fact it can even cook risotto!

So the Actifry gets the vote for most useful and effective purchase. There have been issues with reliability though, so do make sure you extend the warranty.