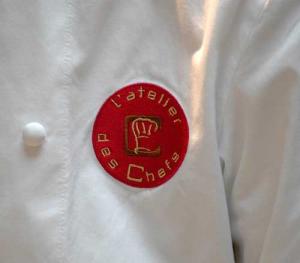 What are your plans for lunchtime? A cold sandwich at your ‘workstation’ perhaps? How about something in a Tupperware box brought in from home? Maybe a dodgy pie and chips in the pub? There’s always a restaurant, of course, but these days who can afford the risk of being late back? Only the bosses have that little luxury left and they aren’t picking up the bill for their three-course lunch like you are.

So what about learning to cook squid stuffed with chorizo and swiftly eating it before the hooter goes to summon you back to the factory? Now that’s a working lunch we can all get behind.

Atelier de Chefs on Wigmore Street is half fancy cookware shop and half working teaching kitchen. It’s not actually an atelier in the literal sense; it’s on the basement and ground floors, but it is a genuine workplace for artists. They run cookery courses non stop here, from early in the day until well into the evening, and when they aren’t doing that, they are being used to host foodie launches and events.

You can choose from a multitude of courses aimed at all levels of expertise but we went for the temptingly named Cook, Eat & Run. At 12:30 a disparate group of people, around twelve in all, assembled around the steel tables of the kitchen buckling on disposable aprons and eyeing up bowls of squid, chorizo, onion, red pepper and assorted other ingredients. This is a recipe designed to be chucked together when arriving home slightly frazzled from work and hopefully with a stiff drink close to hand. 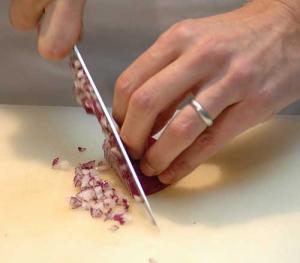 Chef Andre Dupin called us to order and we dutifully lined up for instruction, his manner efficient and professional but not unfriendly. He showed us how to chop an onion into those perfect little cubes you see on telly. I’ve read about how you do this a score of times but never finally ‘got it’ until now. Watching Andre do it finally made it click and now I do it at home all the time, even if we aren’t eating onions, it’s so satisfying a trick. It also, as Andre explains, stops the eye-watering effect that onions usually have which comes from hacking the onion to bits, crushing it rather than slicing it so that it then releases the volatile compounds that reduce you to tears.

The same chop technique can also be used for garlic as he showed us, but that was getting a bit Bonsai for me. My fat fingers and I will have to stick to whacking the clove with the flat of a blade and then mincing. Even so, the ‘claw’ technique of holding an item when chopping that we were shown will come in useful for making sure I can continue to play the piano with all eight fingers.

So then it was back to the chopping boards at our stations and equal division of labour. Each table of four was catering for itself, so one person chopped chorizo, one the onions, one the chilli (remembering not to wipe eyes halfway through or suffer the pain) and so on. As we were against the clock, speed was of the essence and good chopping technique lessened waste of materials and time.

And then the stoves with a volunteer from each group taking up the pan. Oil hissed and spat and those of us leaning in with our pocket digital cameras leapt back sharpish wiping the lenses and slightly singed arms. With all the ingredients fried off it was back to the boards. 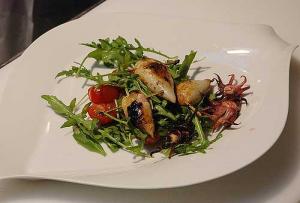 They say life is too short to stuff a courgette flower; well stuffing a baby squid is pretty fiddly too. First pull out the ‘quill’ that may have been left inside, then attempt to shove the chorizo mixture in with a teaspoon that’s demonically just fractionally bigger than the squid’s opening. Then try using the back end of the spoon, then with increasing frustration just start ramming the mixture in any way you can. After a bit the squid becomes alarmingly tumescent with filling and the skin drum tight. Result. Seal the end with a cocktail stick, breaking off the excess, and you have what appears to be a pan of factory-reject condoms stuffed and ready for the pan.

They take no time at all, just a few minutes while the skin sears a nice colour and the tentacles spasmodically curl up. Out of the pan and onto the plate with the rocket and sliced baby plumb tomatoes. Next door a long table is laid and we cart off our plates in triumph. 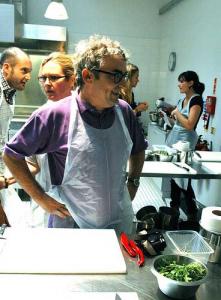 I have to say that mine was pretty tasty, but then as a veteran of cookery courses I made sure I was eating ones that someone else prepared and not me. A glass of wine to wash it down, a quick check of what other people had sneaked away from, ‘we’re IT geeks!’ two men cheerfully informed me, ‘this seemed like a something different to do at lunchtime,’ and it was off and out and back to work.

The courses at Atelier change all the time and so it’s best to check out their website to book ahead, especially as they fill up fast. Fun, affordable and suitable for everyone they also help you take home skills that will be useful for ages. If ever anyone asks, ‘Is there a squid stuffer in the house?’ I will be elbowing my way to the front saying ‘Stand back please, I’m a professional