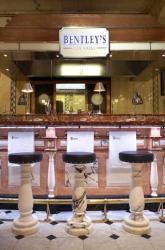 Richard Corrigan is holding a champagne glass, it’s just an ordinary champagne glass but in his giant paw it looks like something from a dolls’ house. Larger than life he stands out even in a Harrods Food hall thronged with press people going Darryl Hannah ‘Mermaid’ on his seafood.

It’s the press launch of Bentley’s Sea Grill at Harrods, and with the iconic store now closed for the evening we’re free to sit and eat anywhere in the hall. Plates and plates of beautiful native oysters appear. Naked but for a shot of lemon juice, they’re some of the finest oysters I’ve eaten anywhere.

Rock oysters come out with a Vietnamese dressing of shallots and fish sauce, while other oysters come with plenty of butter and garlic and baked in the oven, making the flesh velvety textured and a bite to savour slowly.The seafood swimming by has my eyes on stalks, rather like the enormous langoustines that come just boiled and ready to be dredged in a classic Marie Rose Sauce.

Salt and pepper squid with mayonnaise is perfectly fried, the squid tender and the batter crunchy. Grilled head-on large prawns have been split, but not separated. Spiked with chilli they come roaringly hot off the grill and I burn my fingers tearing into them for the meat, but it’s worth the pain. 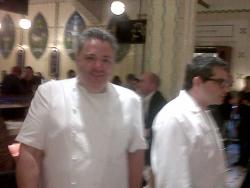 Salt cod’Scotch Eggs’ are served in egg cartons, fish and chips with mushy peas and plaice goujons both come in paper cones. Smoked salmon from Bentley’s own smoker is served in chunks, so you get something serious to chew on. Oh and there’s lobster and dressed crab and champagne too, so no one goes hungry or thirsty.

Of course this new place isn’t going to be cheap, no one goes into Harrods looking for a bargain do they. On the other hand the quality of the seafood is clearly second to none and it’s a fun place to eat.

Richard weaves his way magnificently through the throng beaming his head off. I tell him I am finally stuffed, I can eat no more.’You can never eat too much seafood!’ he roars cheerfully.

The menu also features the Bentley’s classic Royal fish pie, a dish first served at the Queen’s 80th birthday as part of the BBC series Great British Menu. A choice of desserts includes dark chocolate mousse and crÃƒÂ¨me brulÃƒÂ©e and the wine list will focus on the Old World.