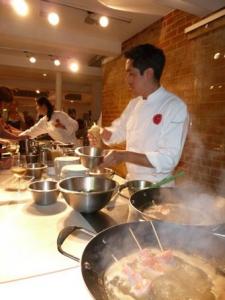 The fiddlehead ferns stole the show, what with their curly fiddling and green tendrilled prowess. We’d come to L’Atelier des Chefs cookery school to learn about Canadian ingredients hosted by the Canadian Tourism Commission. So it’s not all moose or mousse or mouse? Seal flipper pie or Niagara juice?

And despite the Canadian chat about syrups of birch and maple, berries of cloud and lingon, almost every attendee was neck-craning for the fiddlehead ferns. We found them cowering in a bowl at the far end of the kitchen, regretting their earlier bravura. They are the unfurled fronds of a fern, curled like a little green snail, crunchy when blanched and tasting a cross between asparagus and grass. We ate them with gently poached salmon cubes, a beautifully simple and healthy little dish.

My favourite ingredient was the birch syrup, a sweet and breathless sap which, flash fried with scallops – plentiful in Canada – and lardons was totally delish. We also tried whole roasted striploin of bison with braised cabbage in a blueberry coulis. I’ve not had bison before and had expected it to be beefy but it was milder, milkier, perhaps insulated by all that shaggy fur.

The fish Artic char also made an appearance which we rolled up in sushi. I couldn’t taste it – too many other flavours in my cack-handed, own-rolled sushi – but it seemed versatile enough for this. Other flavour makers included a licorice maple syrup and hemp oil which were both used to fry the scallops.

During the evening, we lubricated with water made from icebergs, ice cider cocktails and a good Canadian Pinot Noir. A case of you – or of good wines. Joni Mitchell – you have some competition from your fellow country fiddling ferns.