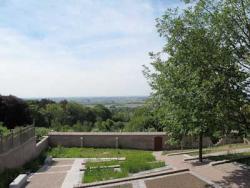 ‘He marched them up to the top of the hill and he marched then down again.’ Sounds rather as if The Grand Old Duke of York wasn’t so hot at map reading, or maybe he just wanted his 10,000 men to admire the view.

Cassel, the town which legend often cites as the hill in the rhyme, stands proud over French Flanders, an area otherwise as flat as the proverbial pancake. It’s this pre-eminent position that has always made it a military must-have, from 1071 all the way up to the First and Second World Wars. 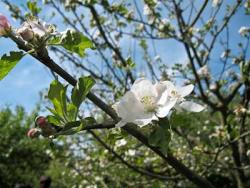 The town has survived its rough handling well and remains a very pretty place. The main square is surrounded by historic buildings, nearly all in daily use, and there are lots of restaurants with tempting menus and a shop that sells fine local foody treats such as cheese as well as of course, local beer. 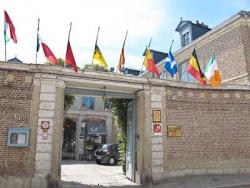 A relatively short drive from Calais or just an hour from Eurostar Lille station, Cassel is now defended by a winding cobbled road that ascends sharply and sinuously to the main square. The cobbles shake your car as if it was coming under machine-gun fire and the local suspension mechanic must be a rich man.

It’s worth it though when you pass through the courtyard of the town’s luxury boutique hotel, Châtellerie De Schoebeque, and suddenly see the view from the glass-walled dining room. It is quite stunning and with its themed bedrooms and grand style it’s the perfect place to base yourself when visiting the area . 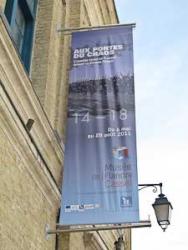 This part of Flanders is central to any history buff’s tour of the battlefields. From Cassel Marshal Foch, the Supreme Allied Commander during WWI, directed the ebb and flow of battles from his office in the newly opened Musee De Flandres. 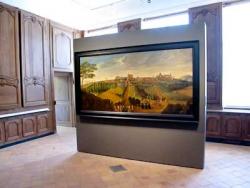 Here in what was once the town’s administrative centre dating from 1218, the town has created a state of the art museum. Without spoiling the building’s unique look, the foundations have been reinforced, the original wooden floors renovated and put back and the centuries old beams repaired and made structurally sound.

Everything of historical value was taken away, meticulously restored and then carefully refitted. What is interesting that they have done away with old-fashioned ‘recreations’, such as the old representation of Marshal Foch’s office, the type that seek to give the impression the man has just popped out for a minute and instead gone back to the rooms’ roots. Instead it is clean representation of the room. 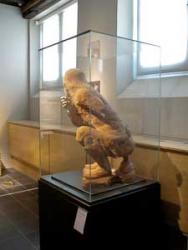 Roots too are in evidence in the garden behind the museum, looking out over the countryside. The aim is to create a sense of all the hills in Flanders and to preserve flowers and shrubs and for it to be in itself a living part of the museum and not just an outside amenity. 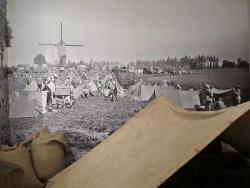 The main interest right now in the museum is the temporary exhibit. A moving, detailed and often multi-media exhibit that focuses on the First World War and is called Aux Portes de Chaos (At the doors of chaos).

A thoroughly modern exhibition it includes rare mementos, eye witness accounts, war artists’ powerful works, sound and lighting effects and moving testimonies and personal stories, all offering a new perspective on the terrible slaughter in Flanders without being depressing or musty. 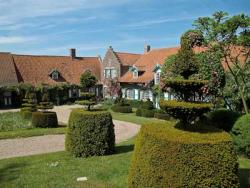 Even so a breath of fresh air is a must afterward and so it’s handy that just a short distance away is Wouwenberghof Ferme du Mont des Recollets, a wonderful country house that has the most inspired and beautiful gardens perhaps in the whole of Flanders and was winner of Garden of the Year in 2010.

Restored by the descendants of the original owners in 1990 the house and gardens are impossibly picturesque. Fourteen ‘Rooms’ in the garden are each unique and planted according to designs dug up from the past and with inspiration also from today. 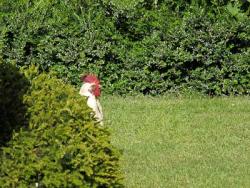 The owner Manu de Quillacq, a charming man who loves guiding you around, has created a perfect little Estaminet, or bar, here from the old pig sties and there serves local apple juice, as well as a selection of the excellent and very strong local beers. 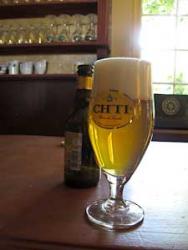 Far from being a backwater, but a part of Europe unjustly ignored, Flanders has a lot going for it, not least how near it is to the UK and the fact that the locals speak French not the impossibly tongue twisting Flemish.

If you like beer, history, beer, gardens, beer and scenery (and beer) you should take a trip to Flanders and get it all in one go

By Foodepedia19 May 2011Articles