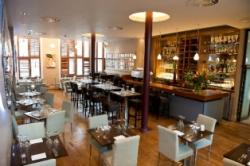 There’s a good reason Soho members clubs are the preservation of society’s elite, and that’s to keep plebs like me at bay. I did a just job of proving how sound that door policy is on my recent visit to Century Club. How did I even get through the door? Because they have just opened the marvellous Century Brasserie to the public.

Through the discreet entrance on Shaftesbury Avenue and up the stairs to the first floor is as far as your reservation will get you. Beyond there are three access-only levels where agents, authors, actors and artists huddle and cuddle in comfortable corners or high above the chimneys of Theatreland on the romantic, palm fringed roof terrace.

Really we oughtn’t to have seen this bit at all: I’d had a glass of wine at lunch time (always dangerous) and my strappy sandals had already taken a dislike to the polished wood floor causing me to skid, legs akimbo, in the style of the nation’s current favourite, very tall, accident-prone comedienne towards a table of very important looking media men. Good start.

The kindly staff pretended not to notice such foolery, nor my alcohol induced flush, and instead exuded a relaxed matey charm throughout. We liked the room as soon as we entered: warehousey but warm, flooded with sunlight and peppered with greenery. We were given a booth – another bonus – and a tall menu full of my favourite things to eat: Fish soup and oysters, pan fried foie gras and Ibérico ham, moules marinières, côte de boeuf, raspberry trifle and crumble and custard.

This is unpretentious brasserie cooking ideally priced and styled for a smart lunch with the girls or a pre-theatre dinner, with three courses for a bargain £15.50 between 5.00 – 6.30pm. Rare breed meat, fish and fowl come hot from the wood burning oven, salads are seasonal and creative and a handful of daily specials makes choosing even harder.

I went for Dorset crab mayonnaise with ‘a little bit of shell”, a warning disclaimer that results from each one being battered by the chef’s own hand. Decently proportioned, its delectable taste of the sea is lifted with a hint of sweet citrus provided by segments of pink grapefruit. Chunks of creamy avocado and crisp, warm ciabatta slices complete a lovely summer starter.

My friend R wanted to try the Ibérico ham, seduced in part by its pairing with Dolcelatte, pine nuts, pear and tiny dots of baby basil. It came in generously cut slices laden atop a rustic wooden board, the green, blue and yellow accompaniment setting off the beautiful blood red meat. She loved it.

Having eschewed steak tartare at the beginning of the meal, I couldn’t not have it for mains. Steak tartare can be over-facing and sometimes downright scary, depending on how it is presented; this was neat and prettily garnished with a small golden yolk on top and a mound of French fries on the side. In the eating I found it had too much ‘middle’ for my liking. As though all possible flavour enhancements had been thrown into the mix – cornichons, capers, red onion, green peppercorns, parsley, Worcestershire sauce – and in too great a quantity.

R’s lamb tagine was another rainbow affair, brown ochre with spiced orange chick peas, yellow and green coriander couscous, bejewelled with claret red pomegranate pips. Light and delicious and all washed down with a couple of glasses of white Rioja from Bodegas San Pedro. For a members club the wine list is alright with plenty in the twenties, if you know what I mean.

Finding space for pudding at lunchtime is hard to do but we soldiered on, opting for two of the lighter concoctions: a vanilla cream pot with ginger shortbread, which was by any other name a crème brûlée without the crunchy lid, and an expensive tasting Valrohna chocolate mousse, with a blob of chewy honeycomb ice cream on the side. So very good.

And then came the impromptu tour. Up we went the remaining 85 steps of 100 – hence the club’s name – nosing round corners, hoping to see Sienna Miller mid-snog or Daniel Craig doing the crossword and there she was. The nation’s current favourite, very tall, accident-prone comedienne being interviewed by a crusty looking hack. She caught our collective eye and glared, looking non-too jolly for the nation’s favourite, award-winning funny girl, I have to say, and then as if in warped homage, my strappy sandals gave way for the second time and I skidded on by, legs akimbo, with a loud ‘whoops!” for effect.

That kind of eye-rolling performance, plus my having to physically restrain R from introducing herself as the ‘lost sister and potential best friend” of aforementioned famous person, is precisely why Century Club should stay as it is, an exclusive oasis of calm togetherness for cool people with excellent balance who happen to like really good grub. The rest of us should feel grateful that they let us over the threshold at all.