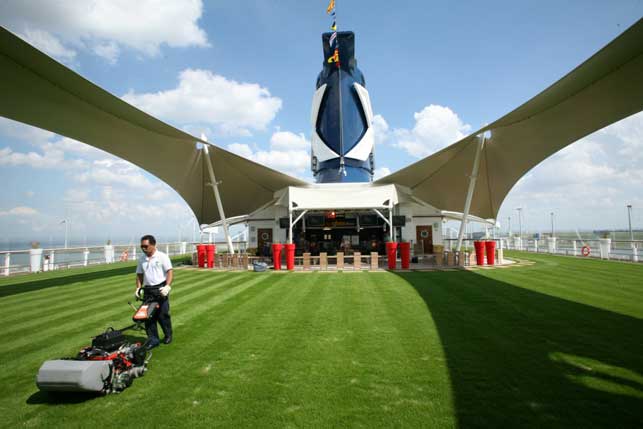 From working at Washington’s ‘Watergate’ to opening Las Vegas’ ‘Playboy Bunny’, Jacques Van Staden now has a new ambition. The Food and Beverage Vice President of ‘Celebrity Cruises’, a luxury fleet of ten leviathans, with three more on the way, intends his most upmarket restaurant on ‘Celebrity Equinox’ to be the first at sea to win a Michelin star. In advance of its naming, I made haste to Southampton to appraise the newest and most environmentally friendly cruise ship.

The American firm’s un credit-crunch spend of £700m is remarkably visible. At 1,033ft it stretches 150ft further than the Titanic and weighs-in at nearly double, although President, Dan Hanrahan was keen to point out that his captain is ‘much smarter about icebergs.’ Built by a German yard dating to 1795, it took 19 months to build, then with tugs as antennae, a further 19 fraught hours to nudge to sea via the narrow River Ems.

The shimmering pleasure palace encompasses ten restaurants, a casino, theatre, clubs, pools and spas. Serving 2,850 passengers are 1,253 crew from 56 nationalities. To ensure smooth delivery of 12,000 meals a day from an almanac of 3,786 recipes, half of the brigade focuses on food. Overseeing all of this across every ship in the fleet, I was unsurprised to learn of Staden’s military background.

Whilst an absence of markets and limited storage aboard must make it nigh on impossible to match quality terra firma, I harboured great expectations.

‘Murano’ is the pinnacle restaurant, confirmed by the butter. One of several subliminal messages, it is shaped as a pyramid, rising to make the point. Another concerns the silver condiments, so small as to seem unnecessary, although the perpetual lap of an outsize peppermill upsets such poise. However, instead of grinding me down, I forgave such eager service as symptomatic of a restaurant in its first days of business. 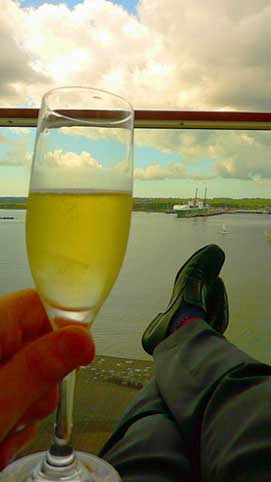 As with Angela Hartnett’s starred restaurant in London, this moveable ‘Murano’ takes its name from the Venetian island famed for its glass. However, rather than Italian, the cuisine is haute French and instead of kitschy, brittle glass, the Adam Tihany designed neo-Edwardian décor is more moody panels, view blurring voiles, joltingly colourful Goddesses and sick camouflaging carpets. There is, I suppose enough glass blown on deck demonstrations near the real, lush lawn. When I waddled there after lunch, fast feeling at home, sipping Gin and Tonic on this Gin Palace, I discovered our national croquet team putting the world to rights.

Declining the conviviality of the Chef’s table, a well-known critic booked in for a massage. Regardless, our ‘stylishly greedy’ group of journalists and competition winners embarked on a dozen of Staden’s favourite dishes with gusto.

As punchy Maine lobster bisque was decanted from teapots, Staden explained how he buys them in container lots of 28,000. Such deathly decadence made me splutter.

A slightly jaded spinach spun stack bore musky rillette and ‘sunny side up’ hen’s egg. This was topped-out with a generous and successful chiselling of port preserved truffle. In an accurate observation which also gave insight into his quest for refinement, Staden thought a quail’s egg might work better.

A goat’s cheese and Parmesan soufflé pricked with basil pesto was remotely Roux-like but architecturally neater. Cooked foie gras from a black necked Canada goose (which I never before knew you could eat) tasted indistinguishable from the standard bird. It came with a tomato jam scented pancake of more rillette and sweet, roast ginger sauce. Whilst fine on its own, the latter rather sweetly over-gilded the lily, although a dab of rather fresh, kumquat marmalade scented Sauternes elegantly scythed through

To counter the fact that meat must be frozen, Equinox was built with five-day ‘thawing rooms’, which convincingly revive food like the five-spice, crusted New Zealand venison loin. Ruddy, gamey and buttery, this was licked by a powerful, half-sweet sauce of crimson Lingonberry. I since learnt that Americans have such a fervour for this bitter, meat friendly, antioxidant berry, that stores like IKEA sell actual buckets of it in bucketloads. A heatwave ripened Brunello offset the slight bitterness. It came from winemaking elite, Marchese Piero Antinori – ‘a friend’ of Celebrity Cruises.

Alas, despite being shrouded in a reasonably attractive but masochistically complex potato net, Loup de Mer (i.e. sea bass) was not waving but drowning in grease.

A selection of reasonably – but not perfectly – maintained French cheeses were rinsed by single estate port made from the best of the crop of an unclassified year (Graham’s ’96 Malvedos), although a slushy Roquefort ice cream later repeated. From six shot glasses set in a hollow tube, possibly blown by those by the lawn, ‘Les VI Etoiles du Murano’ proved the star dessert. My favourites were white chocolate and raspberry mousse (which tasted of Battenberg) and mint ice cream with, despite its frivolity, caramelised popcorn. 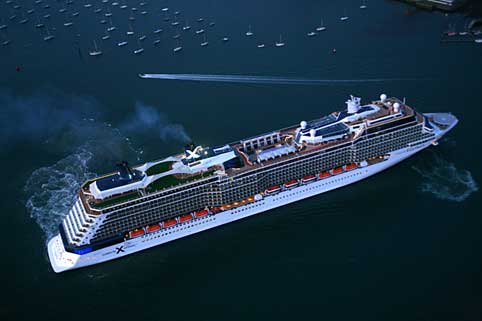 It had been an interesting meal, crisply presented and despite the gargantuan peppermill, professionally served. My first taste of cruise food (and possibly last for a few decades – I’m hardly their demographic) also revealed new ingredients – Canada goose, lingonberry and New Zealand venison. But I still left the chef’s table in a vague frame of mind. Perhaps, as Staden had mentioned, British customers really are the most difficult to please? Or perhaps my apathy was again a result of that tiresome tyre guide – cooking to their authorised shopping list in pursuit of an elusive listing. And to that effect, perhaps Staden will see his dream come true. Slaying 28,000 lobsters does, after all, make one hell of a statement.

Equinox currently makes her maiden voyage to Norway’s Fjords, followed by a ‘Best of Europe’ itinerary: France, Spain, Portugal, Italy, Gibraltar then Rome. At the end of the summer, she crosses the Atlantic to homeport, Fort Lauderdale.