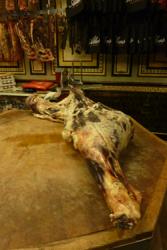 It’s funny how fickle the food world can be. People who spent the nineties and early noughties rhapsodising about ‘aceto balsamico’ and ‘EVOO’ (balsamic vinegar and extra virgin olive oil to you and I), now wouldn’t touch the stuff. It’s all about rapeseed oil these days don’t you know. It’s part of the increasing trendiness of British produce.

Witness the supermarkets getting on the bandwagon, seemingly so patrotic with their Union Jacks that you half expect them to start pumping ‘Jerusalem’ through the speakers, and it can all feel a bit hollow and money grabbing. Yet a visit to Allens of Mayfair to try their new Church View English Angus range of beef left me proud to be English.

Nobody could accuse Allens of bandwagon jumping. Having been in their Mayfair premises for 186 years and counting, they are the oldest butcher in England. They still order in whole carcasses and butcher them on the premises, a far cry from the plastic wrapped fillets you find in the supermarkets. It therefore seems only right that they should start stocking English Angus.

Church View Beef launched three weeks ago and already accounts for 5% of their beef sales, a testiment to the growing desire to buy British. Having tasted it, I wouldn’t hesitate to buy it either. Normally somebody who likes their beef rarer than a trustworthy politican, even the well done piece I had melted in the mouth, and was a far cry from the often chewy texture of roasts. This was in no small part down the the excellent marbling.

As part of the launch, we got to witness the head of the shop break down the hind quarter of a cow. The shop itself is dominated by a huge butcher’s block and this was the location of the demonstration. It was astonishing to see the sheer size of the beast. You forget how big cows are when you have a steak that can fit in a small skillet.

The speed at which the butcher worked, expertly slicing between bone and sinew, was impressive to watch. The different cuts piled up on the block, as he introduced us to each one. I learnt that one of their butchers can cut 900 chicken supremes an hour if pushed. That’s one every four seconds. If you fancy yourself as a master butcher, or feel like getting up close and personal with your lunch, they also run lunch time butchery courses.

Church View is exclusive to Allens and is matured for a minimum of 21 days. You can buy it from their shop or their website. At the same price as their Scotch Angus, you have nothing to lose by trying it. In fact, I think you have everything to gain.

Read our take on the Allens’ Butchery course