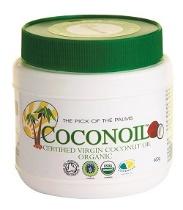 If your encounters with coconut are confined to picking bits of Bounty Bar out of your teeth days after eating one, or sitting behind someone on the bus gagging at the waves of coconut aroma coming off their hair, you may not think much of the’nut.

It’s not actually a true nut at all but a fibrous one-seeded drupe, although that needn’t concern us here, and the coco bit doesn’t refer to chocolate but the fact that the three eyes on a coconut resemble a grinning face.

We eat the meat, we drink the liquid (used as IV drip in Vietnam during the 2nd World War) but we rarely see the oil being used except in hair and skin products.

The oil is however a bit of a powerhouse of good things. It’s one of the richest sources of saturated fat known to us, with almost 90% of the fatty acids in it being saturated. But hang on, aren’t saturated fats evil? Well firstly recent research says no and secondly these aren’t the kinds of sat fats found in steaks or cheese.

These are Medium Chain Triglycerides (MCTs) used as a quick source energy by the body or turned into ketone bodies, which can have therapeutic effects on brain disorders like epilepsy and Alzheimer’s.

The Tokelauans, who live in the South Pacific get over 60% of their calories from coconuts and as such are the biggest consumers of saturated fat in the world, but show no evidence of heart disease.

And in a new study, published last month in the British Journal of Nutrition, scientists discovered that, compared to olive oil, sunflower oil and basic coconut  oil, when virgin coconut oil was consumed the body more readily used fat as an energy source and laid less down in body tissues.

Which brings us to Coconoil, a virgin coconut oil that’s organic and cold-pressed to get every last bit of value. In the tub it resembles solid lard but it melts back to oil at a breath of warmth.

The aroma is quite strong, I would be wary of using it in European foods but we tried it in various Asian dishes and, when the ingredients already included coconut milk, such as in Thai or Keralan meals, the aroma was not noticeable. It was also perfect for cakes.

It can also be used for’pulling’ –  swishing it around the mouth for at least five minutes to eliminate bacteria, toxins and parasites, and of course putting on the skin. All in all a bit of a wonder product

Coconoil also helps more than just the health of those using it. The brand was set up after the 2004 Boxing Day tsunami as a way to help rebuild the livelihoods of Sri Lankan farmers and today helps keep over 200 Sri Lankans in employment. Ten years on from the tsunami Coconoil have recently set up a new project with 200 smallholders from five villages in Ghana and hope throughout 2015 they can replicate some of the success they have seen in Sri Lanka and help to create new jobs and income streams for those involved.

Prices start at just £6.99 for a 280g tub. For more information, or to buy, visit www.coconoil.co.uk

1) Heat the Coconoil in a pan and sautÃƒÂ© the onion with the cumin seeds for 2-3 minutes.

2) Add the carrots, lentils and curry powder. Stir fry for 1-2 minutes before pouring in the stock and coconut milk.

3) Bring to the boil and simmer for 15-20 minutes until the carrot is soft.

4) Blend the soup with a hand blender or in a food processor untill smooth.

5) Check for seasoning and serve.

Thanks to Joy Skipper for recipe and photos.