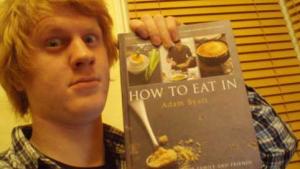 When asked to cook something from Adam Byatt’s (Chef Patron at Trinity, Clapham) new book How To Eat In and describe the experience for this site I felt a sense of mixed emotions. On the one hand I like cooking – I spent three years at university forcing experimental ‘soups’ on people – on the other I’m not very good at it – one pasta sauce I made for a friend actually made her visibly gag.

In the introduction to the book Byatt writes, ‘With a few simple principles, techniques and a chunk of guidance, cooking can be as rewarding as any other family activity.’ This sounded encouraging enough I just hoped the ‘chunk of guidance’ on hand would be enough to stop me from committing culinary hara-kiri. Flicking through the book I decided it would be best to keep things simple. No messing about with starters or desserts, I would skip straight to ‘The Main Event’. Having briefly weighed up the idea of trying to get my hands on some partridge, I ended up plumping for a traditional classic – shepherd’s pie. ‘Surely any old idiot can cook that’ I told myself in the uncertain voice of someone who regularly burns oven pizzas.

Looking through the recipe it seemed pretty simple. As per usual there was your standard mince and potato, things were spiced up a little with the inclusion of lamb shoulder on the bone, a selection of root vegetables and the ‘secret’ ingredient a few lashing of balsamic vinegar. I was feeling confident at this point. Cut a few vegetables up, stick some meat in the oven, and bang, shepherd’s pie. What could go wrong?

Well to start with not much. As per instruction I seasoned and browned the lamb in a pan, cut up some onions (didn’t even cry), and got my herbs in order. Putting the mince to the side, my vegetables peeled and ready, I covered the lamb with ‘parchment paper’ (I did have to ask my mum what this was) and whacked it in the oven at 170.

This had all felt so easy and, dare I say it, natural, that I couldn’t but help feel a little smug about the whole thing. Admittedly you might not think that the ability to follow basic instructions warrants any sense of personal-satisfaction, but whatever, I was cooking, I was living the dream. With an hour and a half to kill, I slumped down in front of the TV with a beer and some crisps. ‘So this is what it feels like to be Jamie Oliver’ I thought, as I watched a repeat of Ramsay’s Kitchen Nightmares. ‘Watch your back Delia, there’s a new kid on the block.’

Continuing to tough talk existing chefs in my imagination, the time quickly passed by and before I knew it I was back in the kitchen, ready for round two.

All I had to do now was take the lamb off the bone, add it together with the vegetables and mince before finally making some mash to cover it all with before popping it back in the oven for fifteen minutes. With my new found sense of confidence I felt I was on the home straight. The mash turned out beautifully, fluffy and lump free, and I was just about to spread it onto the pie when I had a sudden jolt of realization. I had forgotten to add any balsamic vinegar earlier. 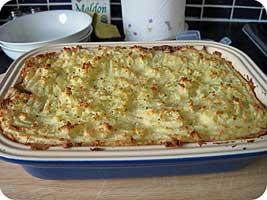 I began to panic. This was, after all, the ‘secret ingredient’. Without it, I reasoned, every thing else would be a waste. I checked the recipe and there it was, 200ml balsamic vinegar, jumping off the page at me. I breathed slowly for a minute before taking charge of the situation. Having failed to add any earlier, I hastily decided to throw a load on to the meat before adding the potato. It would be fine… I’d begun to lose my cool however; this incident had thrown me off. Ignoring the 200ml guideline I chucked a whole bottle of balsamic onto the mince. Quickly spreading the mash onto the meat, I placed it in the oven and breathed a sigh of relief. Surely that would do it, if the secret ingredient weren’t added at the right time at least there was plenty of it to make up for the fact.

Unwittingly and innocently I had just destroyed all my hard work. As I watched my mother wince her way through this vinegar disaster, politely consoling me that it wasn’t ‘that bad’, I hung my head in shame. ‘Who’s so tough now, eh?’ imaginary Delia jeered in my head, as a Greek chorus of TV chefs cackled in the background, ‘who’s so tough now!’