‘Oh Dubai it’s all bling and excess isn’t it, nothing to do, see or eat there’Ã¢â‚¬Ëœ Nick Harman finds the naysayers couldn’t be more wrong.

Red, red, wine, it goes to my he- eh -eh ed’, except that it doesn’t here because neither red nor white wine are an option at The Big Grill in Muslim Dubai.

However I do have a compensatory stacked plateful of grilled lamb, Lebanese mashawis and other food treats to gnaw on as I tap my toes to the bland white reggae beat from the UB40 boys up on stage.

The Big Grill at Dubai Emirates Golf course is a 2-day celebration of everything BBQ; packed with BBQ cook-offs, burger eating competitions and BBQ picnics amidst live performances from world-class artists and local DJs. It’s not perhaps what people usually expect from Dubai, but that’s the point, 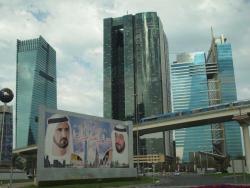 It’s all part of the Dubai Food Festival, a new idea for a city more famous for soaring tower blocks, supercars on the street and money, money money than it is for food.

Dubai is a massively multicultural city of course and the food available reflects that. Over 200 cuisines are being represented at the Festival, which takes in everything from shipping containers at’Beach  Canteen’ – where I ate locally caught fish while the setting sun pinkly illuminated the amazing Burj al Arab hotel – to the highest of high end restaurants. Whatever your pocket, you can afford to eat widely and well. 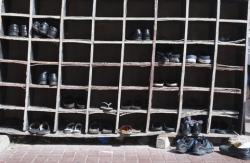 The eats are scattered around the city, but for such a wealthy place Dubai has paradoxically very reasonable taxis. And even better is the Dubai Metro,cheap, efficient and fast and a great way of escaping the endless traffic. 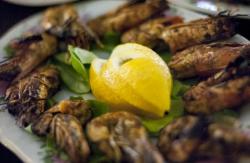 The festival runs for almost three weeks but you’d be hard pressed to try everything everywhere, even if you had all the time and taxis in the world. I bounced around the city like a foodie ping pong ball, gaining weight at a frightening speed and grateful that at this time of year Dubai’s temperature is a do-able 26C or so. Come the height of summer only mad dogs or Englishmen would venture out into the 50+ heat of the day. 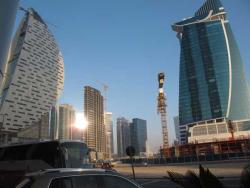 Of course everywhere is air-conditioned, even the bus stops, and each hotel is an oasis, almost literally. Hotels have the advantage of allowing alcohol sales to non-Muslims and while I am not into getting madly drunk, which wouldn’t be a good idea anyway in strictly policed Dubai, I do like a beer or wine with my food.

You can travel a world of food without even leaving your hotel should you wish. I was staying in the world’s tallest hotel, the twin towered recently completed JW Marriot Marquis and it’s home to no less than twelve restaurants. On the top floor is Prime 68, where I spent a long, modern-traditional brunch, a feature of Dubai life on the Friday’weekend’. Limitless champagne, endless dishes of food, and a view so spectacular it’s hard to stop gazing at it.

On a lower floor The Japanese restaurant Izakaya Social Sushi is modelled to resemble a Tokyo street, the shiny black ceiling giving the illusion of a night sky filled with neon reflections very well. Here Wasabi Girl scoots giggling between tables to read fortunes and grate fresh wasabi.  You can also eat high class Thai in Tong Thai, luscious Lebanese in Nawarra and excellent Indian courtesy of our own Atul Kochhar in Rang Mahal. His sea bass is outstanding here by the way.

A city of secrets

In Dubai the secret supper club concept has also arrived.  Taken out to a featureless industrial estate on the edge of town, with my driver getting a bit edgy too, I was led to a warehouse art gallery where a meal was created using a name chef, a sous vide bath and a cheap barbecue grill. It was fun, even if the food wasn’t quite as good as hoped, and with no alcohol the party spirit that supper clubs enjoy in London was rather absent. Full marks for effort though. 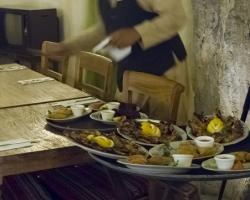 If you’re not into heading into Old Dubai for a local food experience, and more of that next week, then you can do what locals in the city do and go to Al Fanar Restaurant and CafÃƒÂ© a charming recreation of Dubai as it was in the 1960’s before all the building began. 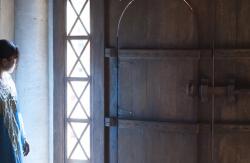 It’s popular with locals because the Emirati food is authentic and the ambiance traditional, chilled and relaxed. I loved the Orange Lentil Soup (shorabat adas) and the machboos laham, (rice with meat and herbs) and could have eaten myself into a coma so generous were the portions. Going outside it was a bit of shock to be reminded I was still in modern downtown Dubai.

How to get high in Dubai 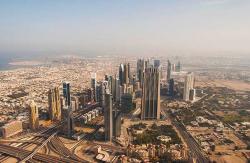 To remind myself still more I made the ascent of Burj Khalifa the tallest building in the world. Taking the stairs would have worked off some of that lunch but at over 828 metres (2,716.5 feet) and more than 160 stories high, I’d still be climbing those stairs now if I had. The view from the top, after the lift has ascended at a breathtaking 10 metres per second, is jaw dropping and I was higher than I’d ever been without having wings. A city with no limits

Down below in the world’s second largest shopping mall, the largest mall is in Canada of all places, I drank raw camel’s milk in The Majlis Dubai – the world’s first camel milk cafÃƒÂ©. Here I also tried camel milk finger foods, pastries and cakes and sipped Camellatte and Camelccinos. Camel milk is slightly saltier than cow’s milk and has health giving properties too, I was told, and having met the camels out at the farm earlier in the week, sweeter natured by far than their poor bullied and oppressed tourist carrying cousins, I could quite believe it. 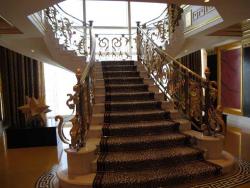 Last stop on my whistle stop tour was the Burj Al Arab, surely one of the most beautiful buildings in the world. Inside though it’s a riot of bling, the designer seeming to take the view that when in doubt simply add more gold. The royal suites are something even a rapper might think a bit ostentatious and I wandered around the rooms feeling how the first Ukrainians to enter Victor Yanukovych’s palace must have felt. And yes, the toilet roll holders are also gold plated. 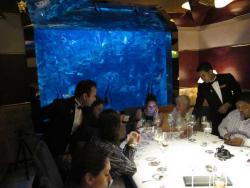 Here as a change from sky high dining I ate underground in Al Mahara, ‘The Oyster Shell’ where giant aquariums full of shoals of (inedible) fish take the place of windows. It’s a fine dining kind of place with Alaskan King Crab and Foie Gras Ravioli on the menu as well as some of the best wines I’d tasted in the Emirates.

Of course I could also have checked out over 480 special menus created just for the festival, visited a dozen farmers markets as well the spice market, checked out hidden gems and cheap eats and generally gorged gorgeously non stop.

The Dubai Food Festival will undoubtedly return this time next year and hopefully so will I.

Flights direct to Dubai from Heathrow start from £410 www.emirates.com

Dubai is currently served by 154 direct flights per week from the UK.  77 flights depart from Heathrow, 21 from Gatwick and a further 54 from regional airports.

We stayed at JW Marriott Marquis Hotel Ã¢â‚¬â€œ This is currently the tallest hotel in the world. www.jwmarriottmarquisdubai.com  Tower two of the hotel is due to be completed this year.Get around with www.arabian-adventures.com

Expedia is offering four nights at 5* JW Marriott Marquis Hotel Dubai, from £646.50 per person departing on 30 May 2014.  This price includes four nights in a Deluxe Room on a room only basis, return economy flights from London Gatwick with Emirates, all applicable taxes and fuel surcharges. To book or for more information visit www.expedia.co.uk