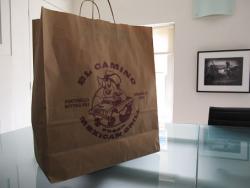 The Working Lunch is something enshrined in office lore.  Far from being resentful at having an hour’s leisure time taken away, the humble worker is grateful to be confined to the office with a tray of sad sandwiches, already curling at the edges, while someone in an ill-fitting suit tries to lead a’brainstorm’.

However as we found out last week, sometimes a working lunch in the office can indeed be energising and actually pull people together. El Camion, the Mexican restaurant group, has research which suggests that hot, spicy food stimulates the grey matter and to prove the point offered to send us round some lunch to try.

Now a free lunch is not unknown at Foodepedia towers so we aren’t easily seduced, but many of the younger writers do have a peculiar fondness for Mexican food. Personally, after twenty or more years of trying the stuff, I still remain to be convinced that, in this country at least, it’s really worth the time and effort. Or the ensuing flatulence.

However my misgivings brutally shoved to one side by greedy twenty-somethings, we assembled in the boardroom to tear into the carrier bags (rather oddly labelled El Camino, so someone messed up at the printers) whisked round from the actual El Camion in Brewer Street. We were in fact starving hungry and we genuinely had some work to do and ideas to come up with.

From the bag emerged many and varied nachos and quesadillas. This was a good thing as I had been fearing the’baby in tin foil’, a.k.a the terrible Burrito whose value is measured in kilogrammes of starch, stodge and cardiac arrests induced. One Burrito is sufficient to render the eater insensible in seconds, his stomach distended as if in the final week of pregnancy and his only desire to slump against a wall and go to sleep. 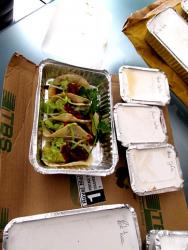 To be honest I’ve always found it hard to work out the difference between a taco and burrito anyway. As I understand it the burrito is a relatively recent handheld addition, designed to appeal to lazy, greedy Americans (c.f. burgers) and of course no one has ever formed a band called The Flying Taco Brothers.

The nachos were rather good; a bit messy to eat but easily popped whole into the mouth. There were distinct flavours in the herbs, shredded pork, the Tinga chicken and in the ground (minced) beef picadillo and the base didn’t smudge that flavour. We slathered on (©N. Slater) a salsa that had a genuine freshness to it, as well as an eye-watering heat and squirted lime juice about. As a result our brains did indeed begin to feel alive and I saw an intern pick up a pen for a second, no doubt wondering what it was and where the usb plug went.

We then either had tacos and burritos; I’m still not sure. There was at least no foil-wrapped monster anyway, Again plenty of distinct flavours, not too stodgy and the meat was again very well done and didn’t have me peering at it suspiciously, as I am wont to do in some Mexican places.

As well as the excellent house salsa, there was guacamole. This was clearly hand made as the texture alternated between smooth cream and large lumps of avocado, something a blender can’t do. As it wasn’t turning black, it had to have been made fresh too.

Some Mexican soft drinks were a third world nightmare of artificial colour and flavourings with enough E numbers to send a small child into a fit, but we liked the margaritas even though we couldn’t quite decide if they actually contained any alcohol. To be on the safe side only those members of staff over 50 were allowed to drink them, in other words Ã¢â‚¬â€œ me.

For a good 30 minutes after, ideas flowed as we mopped the table. Certainly the lunch had perked us up with spice and flavour and the communal tucking in had raised morale (lowered a bit when I took all the Margaritas). After about an hour, some signs of Mex-Valium kicked in as digestion began to take all the blood from our brains and we slowed down to normal pace. 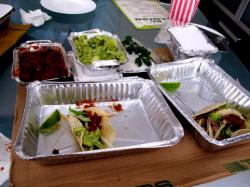 In all honesty it’s hard to say whether the spice really stimulated but the food did make us all happy, and happy workers are productive ones. As I say I’m no expert on Mexican but I found the food to be better and tastier than the other chain products dotted about London that I’ve tried. Even the tortilla chips seemed crispier, lighter and more interesting, when normally I’d rather eat Styrofoam pellets than touch the things.

Will eating an El Camion lunch pull your business out of post-Olympic doldrums?  No guarantees but it’s worth giving it a go, after all anything is better than a sandwich from Cold n Wet isn’t it and El Camion’s grub hits the spot.