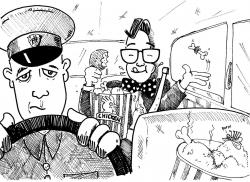 Mmmm chicken, lovely, lovely chicken. You can keep your disgusting foie gras, your morbid pate en croute and your silly pan fried medallions of monkfish, it has to be fried chicken for me every time! Who would have thought that it was so very, very good?

Like so many food snobs I used to sneer at the television commercials showing wonderful multiracial families happily sitting around a large bucket of chicken components in their suburban’lounge’. I smiled indulgently as the Chinese son and Middle Eastern daughter would reach out their little arms to the cardboard funeral urn on the table before launching into paroxysms of delight.

Ã¢â‚¬ËœThis’, I would tell my grandchildren, while wagging my finger censoriously;’is the kind of filth you too will have to survive on if you don’t apply yourself properly to your Latin and Greek’.

Now the grandchildren are grown 20-somethings and like every other child of their class and background they are quite rightly out to shock boring old fuddy-duddies like me.

Some do it by declaring that they have decided to change their sexual orientation, no good in our home of course as their dear grandmother became a man some time ago. In fact we old Hunts are rather proud of our centuries of religious and sexual tolerance, even grudgingly approving of heterosexuals as long as they don’t shove it in our faces, so to speak.

Our grandchildren instead tried to shock us by making us buy them a flat in Brixton so they could pose as unemployed and lose their Eton accents, but while we dutifully pretended to be upset we actually knew many good families who had invested in the area and we were quite happy to do the same. The flat is now worth ten times what we paid for it; an Earl’s eldest son lives next door and the younger sprig of a Viscount is on the floor below, so that’s all right.

Visiting them I admit I still keep the windows of the Rolls wound up but, despite the grandchildren’s desperate protestations to the contrary, it’s clear that the area really is very pleasant. And it was here that I was introduced to fried chicken, the latest foodstuff to have been given what I believe is called a’middle class makeover’.

The aroma coming out of the small restaurant was wonderful; a pungent blend of grease and unwashed bodies, the latter emanating not from the staff of course but from the lines of smart youth queuing to be on trend and perspiring nervously in case they were already too late. 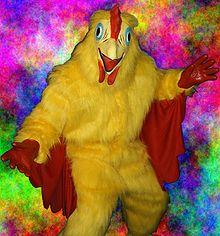 I saw the confirmed bachelor son of the Duke of Calcraigie working the fryer and the delightfully compact, terse and volatile daughter of a certain landed Irish family just behind me. It was she who started the craze off with her charming weekly food column; Where you bloody well should be eating this week, you cretins! I warned the staff of the vital importance of giving her a good table.

We took our own chicken onto the top deck of a passing 159, this is what everyone who is really fashionable does and the grandchildren demonstrated the approved method of eating it. One presses a mobile phone to one’s ear and talks loudly while feeding in lumps of delicious chicken with the spare hand. Bones are to be sucked noisily and then flung onto the floor for the enjoyment of the next passenger who occupies the seat. It was awfully good fun I must say.

My spies at St James’s tell me that no less a food writer than Someone Very Well Connected Indeed has slid aboard what might be called the greasy bandwagon, which must surely be the highest approval of all.

I have thus instructed cook to prepare nothing but fried chicken for breakfast, luncheon and dinner in future, just in case his dear Pa in Law makes yet another of his unannounced visits. We don’t mind that much really, but his manservant Fry has become rather a bore.

We cannot hope to completely emulate the genuine fried chicken experience here in the sticks of course, but when the grandchildren come for the weekend’s shooting I hope they will appreciate just how much grandpapa is’down with the kids’. I may even offer the older boys a small’spliff’ over the port; but naturally only after the ladies have retired to sponge the fat from their Stella McCartney ball gowns.

Yes it’s fried chicken for me forever now, or at least I think for the next fifteen minutes.

Felix Hunt, the man often referred to by Egon Ronay as ‘my Jedi master!’ has been a food critic as long as he can remember. This varies between 60 years and 60 seconds depending on his medication. From early days criticising the food in his Army battalion during the fight for France, an act which eventually led to his court martial and expulsion from the Wehrmacht, to his glory years in the 1980s when most nights he had half the chefs in Soho on their knees in front of him, Felix has never shied away from the truth as he uniquely sees it. More of his incisive commentary can be found here