The grass next to the restaurant appears to be sprouting mushrooms at a remarkable rate, but you really don’t want to pick these. They 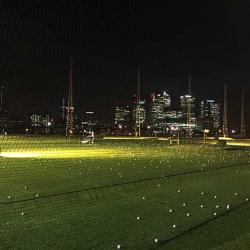 are in fact golf balls, and as Michael Caine noted in the film Zulu, there are’fahsands of’em’.

From the two tiered stand at N1 Golf London, scores of golfers are relentlessly whacking balls out into the sky and the only thing stopping them from sailing on to land in Canary Wharf, glistening like a mini Dubai in the fast setting sun, are giant nets. 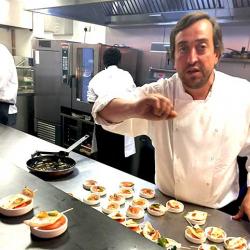 I have a go, my only golf experience up to this point being Crazy Golf (if you want to know how to get around the miniature windmill in two shots, just ask me). This is not enough it seems to handle a real golf club as I swipe wildly into the air twice and then hit the ground on the third go with enough force to almost pop my shoulder out of its socket.

One of the many golf pros on standby steps in, adjusting my stance and showing me how to bend my legs, my arms and how to follow through. Amazingly on my next attempt there is a solid connection and the ball arcs outward like a bullet in a most satisfying way. I can see how golfers can get hooked on the feeling. 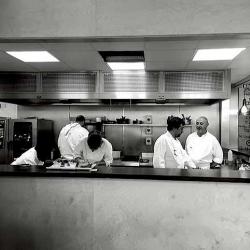 Anyone can have a go, N1 charges £ 12 for 120 balls (£10 off-peak) or 60 for £6 and there are worse ways to spend a lunch hour or early evening, but it sure makes you hungry. Fortunately there is the 19th hole, Vinothec Compass a new restaurant that’s a long way from the traditional clubhouse with its coronation chicken sandwiches and Jaguar Mk II driving men ordering a G&T for the little lady. 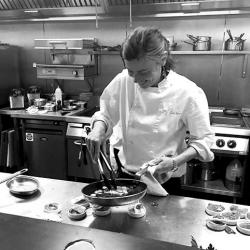 The restaurant is airy, canteen-like which goes with the’casual fine dining’ label it has given itself. People today, we are told, don’t like fine dining, have a phobia about napkins, a fear of tablecloths and a visceral hatred for waiters who glide instead of walking.

On the other hand we don’t all want to eat American Casual Dining, or expensive junk food as it’s better known, all the time. So what lies between? Well step forward Vinothec Compass.

Arnaud Compass, a geographer and geologist by training, and Keith Lyon are the founding partners here and they have invited me to sample a selection of miniature tasting versions of chef Jordi Rovira Segovia’s menu along with wines Keith has chosen himself. One wall of the restaurant is lined with bottles bearing simple price tags that belie their far from simple prices. 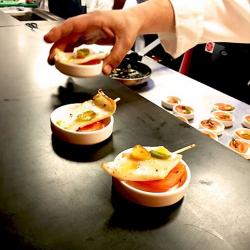 We eat tapas of baby squid, tomato and coriander along with Chardonnay from Bulgaria, a ChÃƒÂ¢teau Burgozone 2012. The squid is excellently cooked, smoky and soft and the Chardonnay likes it. 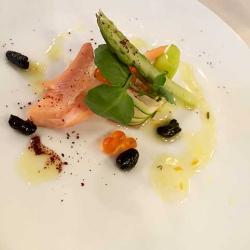 Next up a dish that almost required a magnifying glass to view, this was of course just a taster though, of labneh, dried black olives, asparagus, citrus vinaigrette and fresh oregano with salmon roe.  A Volubilia 2013 Moroccan MourvÃƒÂ¨dre, Tempranillo, Vin Gris rosÃƒÂ© was excellent and the food sharp and clear and the dried olives little nuts of concentrated flavour. 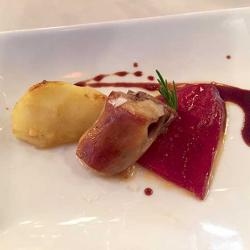 Suckling piglet belly with piquillo was fatty in a good way, melting into the mouth and served with a red that was slightly below room temperature with a slight chill to the bottle. Arnaud explaining that room temperature was often too warm, nowadays. Couvent des Jacobins 2005, a St Emilion Grand cru is a concentrated, darkly attractive wine already softening in its tannins but with still perhaps a few years left yet to achieve its full potential. 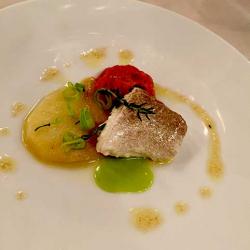 A piece of cod that passeth all understanding was next, fresh from Billingsgate and delightfully firm and well textured with slippery Romesco sauce, the wine Arnaud chose came from where he grew up, Dido 2013 from Montsant vineyards. It had nothing to do with the MOR made in Chelsea chanteuse fortunately and was intriguing in its’thick’ texture. 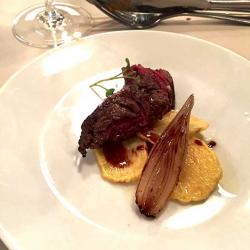 Arnaud rather bravely stuck with this white for the, much anticipated by me, Longhorn Onglet, served rare as it simply has to be, from a fifth generation butcher in Chipping Barnet. A superb piece of meat, one that I regard as the best steak of all. Dido accompanied it (sic) very well indeed and I could have eaten a great deal more of it given half a chance. 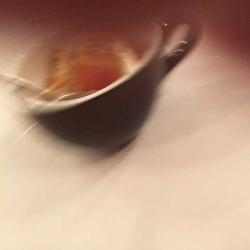 Finally, a deconstructed Vinothec Cheesecake made with cheese named after Jean Anselme Brillat-Savarin. A feast of fats it was as lush as could be and for once I was happy at the reduced portion size.

Arnaud served his last bottle of 1971 Rivesaltes, a part of France I remember only vaguely because while I was there I drank Rivesaltes out of litre containers filled from converted petrol pumps.

Happy days, if now very blurred ones, of being almost constantly drunk and making expeditions in the dead of night across the border to Spain to smuggle back soft drugs. It was thirty years ago, I hasten to add, so don’t go try writing me up for that bizness, seen? 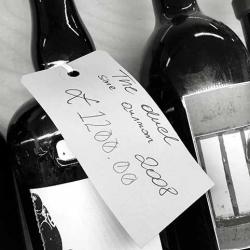 Anyway we downed some espressos from one man band artisan roaster, Francis Bradshaw and I rolled out into the night in search of a kebab, well as I keep saying, they were very small portions. 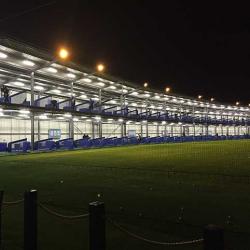 You may not feel that trundling out to what still feels rather like the ends of the earth to eat is worth the trip, but I feel you should reconsider. The food was excellent, the wines clearly well chosen and with plenty more to choose from as well. And you get a chance to thwack golf balls into space, what more do you want?