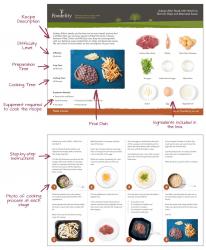 Dinner in a box conjures up a variety of visions: a fish supper from the local chippie; a chicken chow mein from the local Chinese; or one of those Indian meals for two from the local supermarket. However, if your tastes are slightly more ambitious or you have some guests to impress, you might fancy something a little bit fancier in the form of a three-course dinner party in a box from Foodelity.

Foodelity’s gig is that you decide from a list of starter, mains and desserts on their website, tell them how many people you are cooking for and they will deliver all the ingredients you need in a box to your home or office. They also recommend wines to go with each of the dishes, and can even send you a cheeseboard too.

To the cynic this might sound rather like a posh version of the standard supermarket home delivery service? Well, not quite. Foodelity’s USP is the quality of the ingredients and they aim to offer a better class of raw material than you will find from the local supermarket; definitely so in the case of the fish and meat, which are from top quality suppliers.They also deliver the ingredients ready weighed and clearly marked, so there’s no need to get your scales out either.

As ever, the proof is in the eating, so I ordered myself a three course meal for two to test out the service. To start, it was a fish soup, followed by rack of lamb with a herb crust and finally a relatively ambitious white chocolate, strawberry and basil millefeuille.

My first challenge was to get the box home from central London, via the tube. Having received the package at work, I left the box under my desk, went to the pub, returned several ciders later and finally muscled my way on to the tube with it. This operation had the potential to be traumatic, as anyone who has taken luggage on the unforgiving underground will know. The box is fairly large, but comes equipped with carry handles that made things much easier, and I managed to get the thing home in one piece without any drama.

The next evening I had promised the girlfriend a romantic evening in with Foodelity’s three course dinner as the main attraction, so the pressure was on to perform. Naturally they provide recipe cards so I knew what to do for each dish, but there was no information on putting together the whole shebang, so that each course is produced on cue. This isn’t usually a problem for someone with a bit of experience in the kitchen, but can be an issue for relative novices. 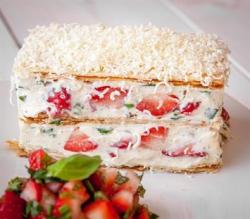 I tactically started off with the millefeuille, which could then be left in the fridge while I tackled the other dishes. The instructions were clear enough, however, I did have an issue with the cream provided. It might have been that it didn’t fare well being left in the box while I was in the pub, but it split as soon as I tried to whisk it. There also didn’t seem to be enough to make the millefeuille as instructed. Nevertheless, once more cream had been obtained, everything went swimmingly. And while mine weren’t quite as dainty as the ones you see in your local patisserie, they tasted excellent, with the strawberry and basil working remarkably well together.

This was the most technical of my chosen dishes, as both the fish soup and the lamb were relatively straight forward to cook. The lamb was of excellent quality, tasted delicious and the herb crust rounded it off perfectly. However, I probably enjoyed the fish soup the most, which tasted better than you would get in most restaurants. With prawns, mussels, whiting, smoked haddock and cod, there was a veritable trawler-full of fish to go round, and, perhaps on a less special occasion, enough in our starter-sized portion for a decent supper for two.

For the service they provide, Foodelity are doing a good job. They take care over the quality of the ingredients, which arrived in good condition (apart from the cream), and there are some nice touches like the inclusion of a few salted caramels as an extra sweetener.

However, our meal for two came in at £44.70, which is much more than I would spend normally. Indeed, for the time rich and cash poor (like me) Foodelity’s service is probably a luxury too far. But if you care about your ingredients and don’t have the time or inclination to hit the shops in advance of that dinner with the mother-in-law, they could be the answer to your prayers.