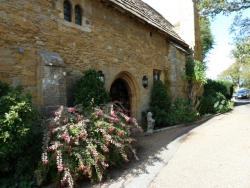 There’s beer money Ã¢â‚¬â€œ the stuff we save to spend in the pub Ã¢â‚¬â€œ and there’s beer money Ã¢â‚¬â€œ the profits made by the brewers of the beer we drink. It was the latter that, in the 1920s, enabled Walter Guinness, later Lord Moyne, to give his wife the home she wanted Ã¢â‚¬â€œ a mediaeval country house. They didn’t buy it; they built it, in Climping on the Sussex Coast, cobbling together original mediaeval stone, beams, windows, fireplaces and doors and the result is a stunningly clever, wholly convincing pastiche. It is now the Bailiffscourt Hotel & Spa which rambles from small cosy nook to small cosy cranny with sofas for sinking into to relax or sip cocktails before dining in the Tapestry Restaurant, its mullioned windows adding character and atmosphere.

A pheasant strutted beside the drive as we arrived. Hams hang from trees beyond the car park (an Aston Martin, a couple of Jaguars Ã¢â‚¬â€œ the cars you want to see to be sure you are where you want to be: somewhere classy but not showy). A peacock strolled languorously past the door leading to my gorgeous bedroom in one of the hotel’s modern annexes. 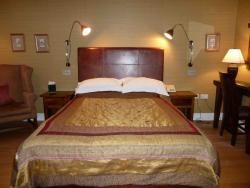 With its red and gold embroidered bedspread and dark sheesham wood bedside tables, I might have been in India. The shower had a distinctly Indian feel, too. No conventional cramped glass box, no whoosh of cold air when opening the door Ã¢â‚¬â€œ a proper shower, almost a room on its own, just as I grew up with in Bombay. The bath was old style, new luxury: a roll top, with a view across fields. Other rooms are unashamedly English with four-poster beds. Biscuits on the tea tray (the prettiest I’ve ever seen) are home made Ã¢â‚¬â€œ I wolfed them down, ignoring my head warning of appetite-spoiling: I was here for a four-course dinner based on locally foraged foods then, in the morning, to go foraging before eating our findings over lunch. I needed every inch of stomach space Ã¢â‚¬â€œ but the biscuits were too good to leave.

It started with canapÃƒÂ©s. A silken green foraged nettle soup was softer in flavour than watercress and sweeter than lettuce. Chutney made from local pears topped my favourite cheese, not quite so local (Wokingham) Barkham Blue. South coast mussel beignets were dreamy. We sipped a lightly citrus home-made elderflower (foraged, of course) champagne before moving into the opulent Tapestry Restaurant.

First we heard from Debra Wood, dubbed The Sussex Forager, with tips and wisdom essential for anyone thinking of searching the countryside for edible treats. Ã¢â‚¬Å“The wild has always been my passion. I’ve always shimmied up trees,Ã¢â‚¬Â she told us before offering her darkest warning: Ã¢â‚¬Å“never take any risks with mushrooms; the death cap mushroom and the panther cap mushroom will put you on dialysis for the rest of your life Ã¢â‚¬â€œ or worseÃ¢â‚¬Â. To stay alive, always take authoritative photographic pictures with you; don’t rely on drawings and definitely don’t rely on the web (Google images might not be correctly labelled). Debra recommends Wild Food, by Roger Phillips (seems to be out of print), Hugh Fearnley-Whittingstall’s River Cottage handbooks (Mushrooms, Edible Seashore and Hedgerow) or Food for Free by Richard Mabey. 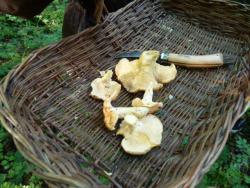 As with everything British, there are rules and regulations and there is etiquette. There is also technique. Dealing with manners first: only take a few of whatever you find, never take all of it (oops). Next, rules and regs. It is illegal to pull marsh samphire out of the ground; scissor some off. Don’t pull mushrooms out, cut them with a knife but, as it is illegal to carry a long knife, use a proper mushroom knife. And now, technique. Collect mushrooms in an open weave wicker basket, so spores can fall through allowing more to grow and to keep the mushrooms dry (condensation will form in anything else). You’ll need a Lakeland berry picker and something to hold back branches or undergrowth or to bring a branch forward if you want to pick from it. Debra has the ideal tool; she made it herself; it’s a broom handle with a nail stuck through one end. Gardening gloves are essential if picking nettles.

Debra’s talk scampered from forest to hedgerow to shore, as did we the next day when foraging. We learned what should appear when (from March, when wild garlic appears) but that the weather can change all that (mushrooms were very late last year because of the rain); that every gardener’s enemy, ground elder, has a purpose (it’s delicious tossed in salads); and that all seaweed is edible (though some are less palatable). 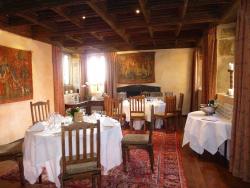 Mushrooms, marsh samphire and seaweed all featured on the menu that evening. Wood sorrel in crÃƒÂ¨me fraiche added a lemony/limey tang to the umami-rich flavour of the Ashdown Forest foraged mushrooms on brioche, imaginatively served with the powerful Sercial, Blandy’s 10 year old dry Madeira, a wonderful contrast with the rich creamy sauce. A sweet, garlicky tomato salsa provided a fresh, fruity note against the buttery saltiness of marsh samphire, both enlivening the fillet of south coast sea bream, served with a well-judged full bodied white-peachy Sicilian white.

Foraged mushrooms appeared again, this time with tender spinach leaves between the pastry and a thick slice of locally-bred venison Wellington; the sharp-sweetness of roasted crab apples balanced the gloriously deeply-flavoured elderberry and port sauce. A Chilean merlot gave the dish a spicy, warm, woody hit. With no room left for a pud, we were presented with three: a rich quince crÃƒÂ¨me brÃƒÂ»lÃƒÂ©e with an intensely fruity blackberry sorbet served with a shot glass full of lightly fizzy, not too sweet rosehip cordial Bellini. This hotel’s head chef Russell Williams worked with Nico Ladenis, as did executive chef Martin Hadden.

If you go down to the woods today 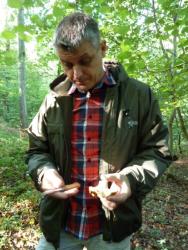 Martin led the expedition with Debra, the following morning, to woods just behind nearby Arundel Castle. The ground was soft, dappled with the morning sun, and twigs crackled underfoot as we followed our leaders. It felt as if we were on a magical, mystery tour which, if we’d found and eaten any mushrooms with gills or shaped like parasols, or the one that looks as if a pixie should be sitting on top of it, we could well have been; highly toxic, they could cause much worse than a psychedelic trip. After months of rain, the pickings were likely to be meagre, perhaps non-existent. Cannily, Martin had been on a reccy the day before and, after passing clumps of various fungi declared to be poisonous, tasteless or woody, led us nonchalantly to a small group of pied de mouton, solid and heavy with short spiky gills (the reason why we call it the hedgehog mushroom). 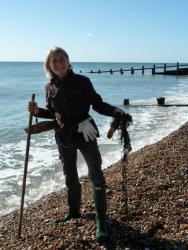 As our find was taken into the kitchen, to be prepared for lunch, we set off with Debra through the hotel’s garden to the shingle beach beyond. Debra’s eyes darted left and right, up and down, her fingers reaching out instinctively to touch a suitable find, bending down, stretching up, scanning every surface, searching every nook. Hawthorn, nettles, hogweed (or poor man’s asparagus, it tastes more like celery; sweat the stems in butter), elderberries, burdock, blackthorn, sea beet (spinach’s big daddy, Debra called it), sea kale (light and fresh with a hint of sprout) and, of course, seaweed. What an eye-opener, seeing so much I’d never noticed before.

With a couple of hours to fill, some went for a leisurely swim in the spa. I sat in the garden reading the paper in glorious sunshine. And then it happened. It was bound to, given the beauty of Bailiffscourt and the quality of its food. A helicopter whirred into view and landed on the lawn, a hundred yards or so away. The four occupants weren’t flash or show-offy; that would be out of place at the understatedly lovely Bailiffscourt. They wanted a good lunch and if you’ve got a small chopper and live a few towns along the coast, you might as well use it and enjoy the view. Contact the hotel to book your landing slot. 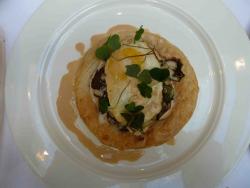 It was time for lunch (smoked salmon, from the small shed that is the hotel’s smokehouse) and a demo from Martin, using our foraged finds. A sumptuous cep and sea spinach tart with fried egg and cep sauce that we posted earlier this year, with tips from Martin Hadden.

Events at the Baliffscourt Hotel & Spa

Other events include a Decadent Gosset Champagne Dinner on 17th May (Gosset is the oldest wine house in Champagne Ã¢â‚¬â€œ and provides the hotel’s house champagne); and dinner with Valentine Warner (friend, colleague and fishing buddy of Martin Hadden) on 26th September Ã¢â‚¬â€œ or choose an event at the two other hotels in the Historic Sussex Hotels group: Ockenden Manor Hotel & Spa in Cuckfield and The Spread Eagle Hotel & Spa in Midhurst.

By Foodepedia1 May 2013Articles