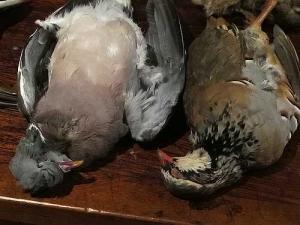 The blue lights flashing through the Fire Stables in Wimbledon Village from the Paramedic car parked outside are too little, too late. The dead bodies lined up on the table are beyond help; they won’t be flying again.

The rabbit isn’t looking too lively either, not with the red leg partridge’s claw in its eye. This is definitely not a scene for vegetarians to savour but if you like your game, well then it’s definitely Game On!

Lee Maycock has assembled this selection to illustrate his talk on game – what it is and how to prepare and cook it. As he points out, game is free range, is killed humanely (if also as sport), and is lean meat locally raised and sourced. As he pats each body cheerfully, naming the individual bird and beast, you can see he’s a genuine fan. He even shoots deer himself as part of the very necessary culling process in Scotland. It seems that left to themselves deer would breed like, well like rabbits basically, and would soon strip the land of every leaf and shrub leaving a virtual desert behind.

He has a red leg partridge, identified by its red leg funnily enough, some grouse and a woodcock. Woodcocks are particularly interesting because of the way they are cooked. You may want to look away at this point.

It seems when disturbed, woodcocks fly off quickly evacuating their bowels as they do so. Well you would too if some bloke with a gun was coming after you. This means they don’t need cleaning after being brought down by anti aircraft buckshot. Shooting them though is not easy; Lee points out they are a hard target and hence command a high price in the shops.

Having bagged your woodcock you twist it around until its beak is up its fundament and then roast it (plucked of course first). After that you scoop out the insides and place them on bread as an extra treat and if you’re a real gourmet you split the head and eat the brain too. Lovely.

No one listening to this manages to faint or throw up so it seems we are all proper foodies. Emboldened by this knowledge, Lee fires up the frying pan to cook a bit of partridge breast for us and to serve with crispy cabbage in cream. You don’t get much but by golly it tastes good.

More dishes followed and if you’re game to try some unusual, seasonal and very local meat, then here are some recipes to try. You’ll find lot’s more at www.gametoeat.co.uk 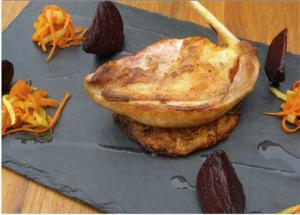 Method
1) Cut the beetroot into wedges,
2) Season and roast for 10 minutes in a hot oven.
3) Place the vegetables into a thick
4) Bottom pan with the butter and cook
5) Slowly releasing the natural sugars.
6) Season and sear the pheasant and cook for 7/8 minutes in a hot oven 220ºC
7) Remove from the oven and allow to rest for 5 minutes
8) Serve the pheasant with roasted beetroot and candied root vegetables 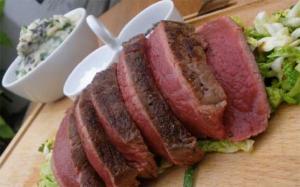 1) Add the hot mash, black pudding and parsley together and set aside.
2) Saute the cabbages and leeks then set aside also.
3) Sear the steaks in a hot pan, season and add a little butter and place in a hot oven 220ºC for 2 minutes.
4) Remove from the oven and rest for 5 minutes before slicing.
5) Correct the seasoning and serve with the wilted greens and black pudding mash.