For Gourmet Burger Kitchen’s 10th Birthday celebrations, I had wondered why they chose the dinky little site on Northcote Rd, Clapham. No offence Clapham, but I have seen more impressive GBK outlets in my time.

It turns out the small shop on Northcote Rd was GBK’s first restaurant. So small in fact, that apparently a restaurant would not even be allowed to open in such a confined space according to today’s regulations. Regulation, shmegulation, it looked just fine to me and managed to contain the revellers with ease.

Recently refurbished, from what I was told was a rather cluttered and worn down affair, the new GBK has a very funky retro vibe with cosy booths and a communal table. It’s also got a great view of the Byron Burger that has opened up across the road.

Now I like a good dose of competition as much as the next guy but I think Byron has pushed the boundaries of fair play. The guys at GBK don’t mind though, in fact Peter Gordon believes it’s good for business and keeps them on their toes. 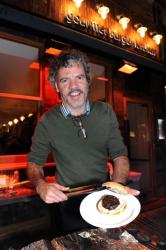 Kiwi fusion guru and all round nice guy, Peter Gordon attended the 10th Birthday event at GBK, flipping burgers and making small talk with the rest of the team. He was part of the original gang of Antipodeans who felt that London needed a burger joint as awesome as everything else they loved about the city.

Gordon was in charge of the food side of things as a small group of mates raised the funds from family and friends to open the first Gourmet Burger Kitchen back in 2001. He wanted the Clapham locals to be able to experience the high quality, casual burger experience that Kiwis have been enjoying for years.

Sourcing the best Laverstoke meat, buns and developing the perfect menu for burger-induced bliss, Gordon went through all the teething problems associated with starting up a restaurant and then braved it through the franchise years when quality control was high on the agenda and the menus expanded and contracted until they were just the right size.

The party was great fun. With an Aussie restaurant manager making sure everyone had a beer in their hand, we were well looked after with monkey nuts and olives to placate our growing appetites.

Starters for the evening inv

olved us testing out their range of sauces including a new pesto mayonnaise on trial. Dipping our double-fried chunky chips into all the sauces was serious fun and a necessary crowd control technique – we were getting restless.

It wasn’t until the towering GBK burgers were placed in front of us that the party really took off. Tables were crowded with beers, burgers and an array of chunky chips, skinny chips and super sized onion rings. We even got to season our chips with the Antipodean’s answer to malt vinegar, chicken salt. Don’t knock it till you try it. Chicken salt is the go to of any die-hard chippo from down under.

My blue cheese burger was put away with the greatest of ease but I had to leave the last little bit so I could shovel in a few more chips and save room for a sip of their shakes. Made with Yeo Valley ice cream, especially developed for GBK, this chocolate shake was promoted to super-choc status with the chocolate chips that mingled in with the thick shake that has a great deal than the usual measure of ice cream.

In case you’ve forgotten, or you’ve been dazzled by Byron Burger’s bright pink lights, remind yourself why you love GBK. There’s a reason these guys have been around for so long and have expanded from that one humble location in Clapham to fifty five sites across the UK.