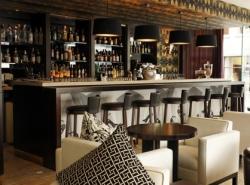 ‘New, New New” is the constant refrain of the ever burgeoning cabal of bloggers who flock to each new opening like vultures. It’s not enough these days to merely review a restaurant, you have to be the first. Witness Alexis Gauthier’s post ton his visit to Pollen Street Social with a blogger. In many ways, this is the natural response to the hundreds of people all writing about the same thing.

There are many problems with this, including the tendency for consensus over careful consideration but I’m not here to bash the bloggers. My main issue is with the overriding emphasis on novelty. If you didn’t open in the last 6 months, it seems they don’t want to know. Whilst some restaurants such as St John’s or J Sheekey’s manage to float about this undignified frenzy, good restaurants can get left behind. One such place is Sartoria.

Located on Saville Row, hence the not quite pun of a name, it offers regional Italian cuisine. Whilst the Row is no longer the sartorial empire it once was, with the number of tailors on the decline, it still retains its air of traditionalism, a place that hasn’t quite moved with the times. Sartoria seems have to escaped this trap, although the restaurant is obviously tailored to the Mayfair set.

The interior is all subtle colours and cream, Very chic, in a fairly traditional way. On my visit, the clientele was very much ladies who lunch and men who do business. I had been invited to try the new bar menu. Whilst you can sit at the bar proper. Sartoria cheats somewhat by offering tables as well. This is Mayfair after all darling.

Opened with some antipasti to share. This offers the advantage of being easy to prepare, but lives or dies on the quality of its ingredients. The assorted bresola and salami was nothing to write home about, but not so bad that I felt the pig had died in vain. Competent rather than celebratory.

A plate of pickles, cut through with the aniseed tang of fennel, was excellent with the pickle accentuating rather than overpowering the veg. One of the features of Sartoria’s bar is a tank in which your mozzarella floats keeping it at room temperature. Now if you are going to make a feature of a dish, it better be good. Thankfully it was a far cry from the rubbery ball of most commonly associated with examples in this country. The main of spaghetti con volgone e cozze had spent perhaps a minute too long cooking, but the clams and mussels were excellent.

Pudding was cannoli, crispy pastry filled with ricotta which we had spotted nestling on the bar previously. The pastry had the requisite crispiness and was a suitably indulgent end to proceedings. Whilst not one of the most memorable meals I’ve ever had, it was enjoyable, with capable cooking. The bar also does aperitivo, the delightful Italian tradition in which you get a free snack with your drink. This occurs between 5.30 and 7pm, ideal for the work crowd.

Reasonably priced and with friendly service Sartoria provides a nice bolthole from the crowds of Regent’s street whilst avoiding feeling overly clincal or stuffy.