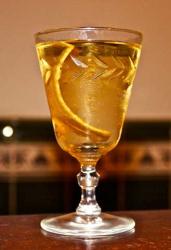 ‘Since 1760 when William of Orange passed the Gin Act, this potent potable has loomed large over the capital. As a medicine and an anasthetic in the dark days when disease, pestilence and death stalked the slums of our fine city. As a drug epidemic, famously illustrated by Hogarth, during the Gin Craze of the Victorian era. As an altogether more genteel libation when mixed with tonic or into a Martini for the well to do drinkers of the post war 20th Century and now in the post millenial years as the domestic spirit of choice for the connosieur drinker of today…’

With the aim of conveying the long history of Londoners’ allegiance to dry gin, the second smallest museum in the capital recently opened in Notting Hill. The mind behind is drinks expert, graphic designer and part-time dandy, Jake Burger. The Ginstitute, which is open daily, re-creates a Victorian gin palace on the first floor of Notting Hill’s Portobello Star pub. Characterful artefacts include an antique Gin Stove which Burger purchased from Ebay for £800, a tipsy tryptych in acid-stained glass, pre-prohibition bottles of the spirit, and a rare edition of Harry Johnson’s Bartender’s Bible. The latter is one of the first books to publish a recipe of the martini, which Burger keenly points out is a drink which grows ever drier over time. He says: ‘it started out with 2-3 dashes sugar syrup, Bocca’s bitters and a dash of curaceau or absinthe and is now mostly about London dry gin.’

Burger also reveals that, in its heyday, a third of all shops in London focussed on gin. He also refers to Hogarth’s ‘Gin Lane’, a painting which depicts mothers abandoning their babies under its pernicious influence. ‘Charles Dickens considered life to be intolerable for so many that gin really was a necessary evil, and one which, when mixed with cholera riddled water rendered it safer.’

Located in Burger’s former flat a floor above the Ginstitute’s bar is 20-litre still, ‘Copernicus’, which neighbours numerous clear vials of botanicals, from kumquat to cassia bark, and of course, requisite juniper. ‘We’ve got 17 so far,’ he says, ‘including Orris which I hand-harvested in Florence, and angelica – arbiter of peace. Angelica is like the salt and pepper for a mixologist.’

An aperitif, history of gin at the ginstitute, designing and bottling your own gin followed by a post-prandial martini currently costs £100 (introductory price). Burger’s own libation, Portobello Road, which features nine botanicals, the recipe of which he prefers to keep secret, is stocked at Gerry’s, Selfridge’s and The Portobello Star. Citing its inspiration, he said: ‘I wanted flavours strong enough to shine through in a Negroni…’